A short circuit in Chitwan has killed one person and injured another, the police inform.

Shakuntala Subedi, 36, a staff of Shikar Insurance died after being electrocuted at the office premises.

According to Narahari Adhikari, the information officer of the District Police Office, the incident took place when people were removing a hoarding board outside the Shikar Insurance office. Following that, a fire broke out in the building.

The 22-year-old Tarun Thapa was injured during the incident and is currently at Chitwan Medical College undergoing treatment.

The fire was put out by Bharatpur metropolitan city, Nepal Police, Nepal Army and locals. Police say the fire has burnt many documents of the insurance company.

The police are investigating the case. 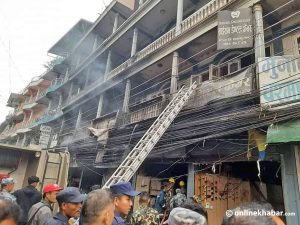