A couple, missing for one month, were found dead and buried underground, in Pipara-2 of Mahottari, on Thursday, March 25, 2021.

An ageing couple in the Mahottari district of southeastern Nepal, who were missing since February 22, 2021, have been found dead, today.

Musafir Jha (66) and his wife Geeta Devi (60), residents of Pipara rural municipality-5, were incommunicado since February 22.

Police had suspected they might have been abducted, however, no evidence had been found.

DIG Dhiraj Pratap Singh, the chief of the Province 2 Police Office, says their bodies were found buried near a pathway in Pipara-2 today.

“They were in a big pit,” Singh says, “This place is around 3.5 km away from their house.”

Earlier, police had arrested four persons including an Indian national on the charge of abduction. Later, police had also seen some drops of blood at the house of a suspect. 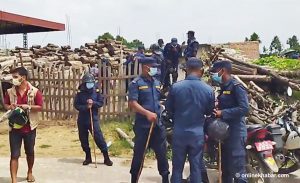