Although landlocked, Nepal is no short of water bodies. The country is rich in water resources with its rivers, lakes, and ponds. In ancient times, the visionary rulers of the Kathmandu valley established many hitis and ponds for easier access to water. Many of these are on the verge of extinction today.

People commonly know about Kamalpokhari and Ranipokhari that lie in the busiest areas of the city. They have stolen the limelight, mostly for controversies they have been surrounded with. But, here are five other water bodies that lie inside the Kathmandu district that you should know about:

This pond, in Tangal/Handigaun, is famously known for its Tundaldevi Gahana Khojne Jatra (a festival to search jewellery). This festival is celebrated every year on Chaitra Shukla Ashtami. Here, locals place the idol of Goddess Tundaldevi Vaishnavi and her youngest sister, Goddess Mahalaxmi. The festival starts at Handigaun, reaches the pond, and back.

The pond lies at the side of the road, giving people easy access to observe and enjoy the landscape.

Another culturally important pond is Naagpokhari at Naxal. The pond is most celebrated on Naagpanchami, the fifth day of waning moon that usually falls in July-August. On the day, devotees offer dubo (Bermuda) grass, milk, along with paste of rice grains and red vermilion powder to the statue of the serpent god (Naag) at the centre of the pond. The pond is a resemblance of the legend that the Kathmandu valley once was full of snakes when it was still a giant lake.

Every day, devotees throng the temple of Goddess Santoshi inside the premises. Likewise, every morning and evening, youth can also be seen thronging the pond for recreation and exercising purposes.

There are not just one but many lakes that relate to the story of snakes residing in the valley. Taudaha, which lies in the southern part of Kathmandu, is believed to be a remnant pool that existed after Kathmandu was drained of water after Lord Manjushree cut the hill to let the water out.

This waterbody is arguably the only waterbody in the valley that still houses numerous bird species including over 20 species of migratory birds. It is one of the important sites in the valley for recreation purposes and birdwatching.

This waterbody shares the same name with Kamalpokhari in the heart of Kathmandu, but it also once shared the same fate. Due to various reasons, including the lack of local initiative, this Kamalpokhari had dried up. But, in April 2016, the pond was revived by the local women in the initiative of Oxfam Nepal’s Cash for Work programme.

After its restoration, the water reservoir is now being used for irrigation and drinking water purposes and has become an unofficial swimming pool for the locals. No one knows exactly when this was built. However, it is said it was built either during the Lichhavi or Malla periods.

Like the aforementioned Kamalpokhari, Ikhapokhari is now another pond that is being revived by the locals. The Centre for Integrated Urban Development (CIUD) is leading this public campaign called ‘Recharge Kathmandu Campaign’. Ikhapokhari became a victim of land encroachment, the lack of local initiative, urbanisation and unplanned water supply management.

This waterbody is situated at Nyokha, Chhetrapati, spread across around seven ropanis of land. This is another pond whose details of its origin and use are not known. But, it is believed it was used as a recharge pond along with Ranipokhari when it was first built, for a long time.

Before it dried up, the pond was culturally very important and specially thronged during Paachhare for rituals. It was also the location that many other local indigenous communities frequented for recreation and their male members’ coming-of-age ceremonies.

The pond is dry now, but locals have plans to soon replenish it to its original glory. 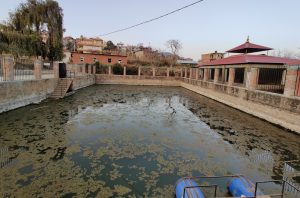