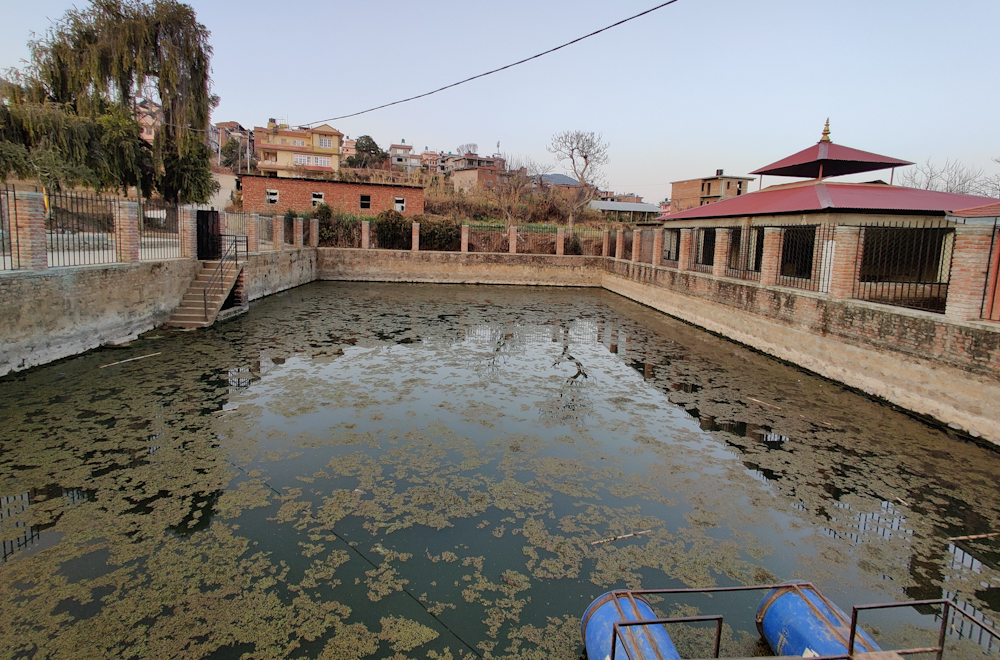 The Kamalpokhari in Pharping on the southern outskirts of Kathmandu

This is the story of Kamalpokhari, but not the Kamalpokhari in central Kathmandu. This older Kamalpokhari is quietly surviving on the hilltop of Pharping, away from the plethora of controversies caused by the eyes of local authorities wanting to concretise and commercialise it.

Locals recall that there were many ponds in the area, commonly known as Saat Pokhari (a group of seven ponds). However, they have become a victim of urbanisation, and the locals misusing and not showing interest to preserve them. And, this is the only surviving pond that locals want to preserve in any way.

This pond lies some 20 kilometres away from the commonly known Kamalpokhari of Kathmandu, in Dakshinkali municipality-6.

It was previously called Paleswan Pukhu (Lotus Pond), then later, as the non-Newa settlement grew in the area, the name was translated in Nepali–as Kamalpokhari– for a better, more common understanding. Locals say it was also called Ranipokhari, but that name too has been lost.

“We do not have an inscription for the pond, but there is an inscription under the Saraswati Mandir [adjacent to the pond] that says so,” explains local Ajiman Maharjan.

“When we dug the pond, we found the same kind of soil that was used in the construction of the temple and the idol, so we assume they were built from the soil taken out from the pond,” Maharjan says, adding that the pond was built some 500 years ahead of the city-based Ranipokhari.

Maharjan adds, “The pond has been important to the locals. In the past, it used to be significant for daily purposes including agriculture. But, now, we use water for irrigation only.” The majority of the locals still engage in agriculture.

While Kamalpokhari in Kathmandu with the same name is struggling to survive from being concretised, locals here express, “We sadly could not save other ponds in the area. But, we are determined to protect this and even make it a tourist spot.”

The local water resource of the pond lies in Panjalpokhari, another pond near Kamalpokhari. At present, rainwater also fills in the river during the monsoon while in dry seasons, the locals up the pond with the help of Kathmandu Upatyeka Khanepani Limited.

To date, locals residing here today remember cleaning the pond twice. “First, it was during the 1998 World Cup; the locals geared up and we drained the whole pond. Then, we watched the World Cup here [inside the pond premises],” says Maharjan.

In addition to their memorable days, the cleaning of the pond gave them another realisation. “That was the first time we knew about the pond’s history and architecture. We were amazed to see the kind of architecture, the design that was used on its base,” Maharjan recalls, “It has black soil, gravel and sand as its base and above a beautiful brick-laid curved structure. We cleaned the pond and then in the next monsoon, it collected the water and the pond revived to its natural look, following the same design.”

“Before that day, we used to hear myths about the pond pulling people inside, stories that claimed the pond was eight-bamboo deep and so on. But, we were welcomed by the beautiful architecture that made us realise we should cherish the ancient way our ancestors built the pond.”

The second initiative was after the 2015 earthquake. During the earthquake, the pond’s walls cracked and water started seeping out.

In 2019, with the help of Oxfam Nepal under its Cash for Work programme, the locals drained the water, strengthened the base and rebuilt it the same way. They, then, cemented the walls to stop the leak. Under the programme, around 30 local women were mobilised.

The locals, on a yearly basis, still gear up together to clean the pond, coinciding with the festival celebrated a day after Gai Jatra.

Maharjan further informs, “After the local government was established, we also got a budget from the local authorities to add the wall around the pond and also the bars around the pond making it like it is now.”

Locals also clarify that they tried rearing fishes in the pond. However, they died soon as they could not be raised carefully. But, it still continues to be the primary source of water for irrigation.

They have already laid pipes to pour water from the KUKL for a regular water supply.