Three foreigners arrested in possession of nearly three kilograms of cocaine have been paraded in Kathmandu, on Sunday, August 29, 2021.

Nepal Police personnel have arrested three foreigners in possession of nearly three kilograms of cocaine, a contraband drug, in Kathmandu and Sindhuli districts of central Nepal.

The Narcotics Control Bureau of the national police organisation paraded them amid a press meet in Kathmandu on Sunday.

The suspects are from Tanzania, South Africa and India, according to police. The Tanzanian was arrested in Kathmandu and two others in Khurkot of Sindhuli.

The drug confiscated from them is worth Rs 90 million, according to police.

The investigators say they had received a tip-off that the South African national was handing over the drug to the Indian via the Tanzanian. 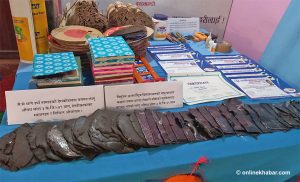