Two children drowned while swimming in the Kankai canal in Shivasatakshi municipality-9 in the Jhapa district on Thursday.

The families of the two had started a search as Sundas and Rai did not return home till late on Thursday evening. During the search, the families recovered the children’s clothes and slippers on the side of the Kankai canal.

The bodies of the two were recovered during the search by the police personnel and local residents last night. 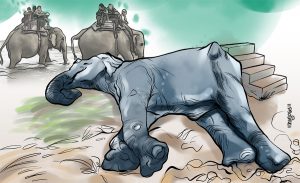