With Nepali cities embracing western lifestyle, the number of swimming pools has mushroomed in urban Nepal. Stakeholders say it is crucial to teach swimming to the urban children, including those living with disabilities. Even with his parents, six-year-old Pritam Shrestha looks restless most of the time. This curious kid cannot move his hands and legs properly as you expect from a child of his age because he is suffering from cerebral palsy. His parents, Prarambha and Prakriti, have hard times to make him eat his food and do other basics.

However, the happiness metre has gone up in the Shrestha family recently. Pritam has joined a swimming class and he is excited whenever his mom drives her to the swimming school. “Our doctors and teachers at his school told us that swimming could work as a therapy for him,” the mom says as her husband adds, “Though we did not think about it initially, we have now realised that the swimming skill could help him save himself from potential risks of drowning in the future.”

Like Pritam, some children living with different forms of disabilities have recently begun learning swimming in Kathmandu, the capital city of Nepal where around 1,000 people die after their unintended fall into the water every year. As in Pritam’s case, the parents mostly enrol the kids at swimming schools for therapy; but they soon realise that it is also a life-saving skill.

Water therapy, also known as hydrotherapy or aquatic therapy, can help children with special needs improve their competence, according to international experts and researchers. MyChild, an internationally recognised website dedicated to parents of children with cerebral palsy, writes, “Aqua therapy is one of the best environments for a child with cerebral palsy to improve physical functioning, especially if the child is not ambulatory.”

“What sets aquatic therapy apart from traditional physical therapy is that the water – which in and of itself is known for restorative and detoxifying properties – provides buoyancy that makes aerobic and anaerobic exercises easy to perform effectively, and safely. Additionally, if the water is warm, it has a massage effect on muscles, joints, and ligaments that often times are over-used and in pain.”

“Though it is not widely available in Nepal,” Pritam’s mother says, “The doctors we consulted told us that it is a must for our son. We were also inspired to send him to swimming after seeing the case of a child of our acquaintance.”

Diwas Shrestha, who trains both Pritam and the second child that his mother referred to, says his company, Swimming Everyday, has so far trained around 15 children living with disabilities, and most of them come to the institute for therapeutic purposes.

“But, moving on, we have realised that swimming for these kids is also about prevention from any accidents they might face in the water in future life. Like other people, now onwards, they can save themselves from drowning because they can swim.”

Most parents of children with disabilities in Kathmandu feel that their children are not at the risk of drowning because they are not exposed to water as other people are. First, they have restricted mobility. Second, they are accompanied by some adults to take care of them. For example, Pritam’s dad also did not think about it initially.

But the child’s coach Shrestha does not agree. He argues that they are at the equal, and sometimes at a higher, level of risk because many forms of disability are not easily noticeable and the people also want to hide their problems. It means their problems and special needs during situations like exposure to water are likely to be ignored in society, which is essentially a risk. He has a story to prove his point.

Last year, a 19-year-old girl came to his school for training. She was perfectly okay in her appearance and no one could even suspect that she had some physical problems. However, in her application form, she indicated that her vision was limited. Even if a person stood in front of her without speaking a word, she could not recognise him/her; she could just see a blurred shape.

Because this young woman does not reveal her problem in front of her friends, Shrestha argues, no one notices her disability. Whenever she goes to some riverbank to have a picnic with some friends, for example, the friends might ask her to swim with them. She knows that swimming can be a problem for her because her vision is restricted, but she cannot tell it to others because she does not want to be considered inferior among her friends. “But now, rest assured that she won’t drown, because she has already learned swimming,” a confident Shrestha says.

Shrestha mentions picnicking on riverbanks as an example of a risky situation because it is a popular holiday activity among the urban youth in Nepal. He himself has lost a friend, who could not swim, to the mighty Indrawati river seven years ago.

Because everyone is equal…

After the death of his friend, Shrestha could not put his step into the water for one year. “It was a sort of trauma,” he says, “But the incident also taught me that everyone should be equipped with the swimming skill.”

After the friend fell into the water, Shrestha and other begged help from local boatmen. “But they asked us back ‘how much money do you give us?’. We said, ‘we would give all the money we had’. But they continued bargaining with us till he breathed his last.” Then Shrestha realised that if efforts were made to teach swimming to all the people interested, regardless of anything including their physical conditioning, such problems could easily and effectively be avoided. “Hence, we have clearly mentioned on our company’s social media pages that we do not discriminate while teaching swimming. Perhaps, that is why we are attracting more children with disabilities and their parents.”

Ashok Bajracharya, who leads Nepal Swimming Association, a government-authorised body that regulates the swimming sports in Nepal, believes that people with disabilities should not be left out while considering swimming as a sport discipline also. “Recently, some private swimming pools and schools have started training these people. Everyone should support them.”

Till a few years back, the movement of children with disabilities was restricted inside their house as people would think the outside world was dangerous for them. “Swimming was beyond what we could imagine for them,” Raju Basnet, the general secretary at the National Federation of the Disabled-Nepal, says, “But such thoughts are shattered these days. Equal access to sport, entertainment, and other opportunities has been possible now.”

According to the 2014 Population Monograph, based on the 2014 National Population and Housing Census conducted by the government, 92,012 children of Nepal, aged 0-14 years, have at least one kind of disability. This is around one percent of the total population of that age. Basnet says this entire population should be offered opportunities for growth and development according to their needs and interests, and swimming can be a good starting point.

Basnet, who represents parents and guardians of children with disabilities in the federation, believes that teaching swimming to these children is not just a therapy or a self-defence skill against prevention. “This is a message that people with disabilities are not more disabled; they are as capable as others.”

Shrestha agrees, “The Sustainable Development Goals call for leaving no one behind. We should not leave anyone behind in imparting life-saving skills that we have.”

Names of the child with cerebral palsy and his parents have been changed here as per the family’s request. Due to the same reason, the images featured here also do not necessarily represent children with disabilities.

The story is written under the Drowning Prevention 2019 Reporting Fellowship offered by the International Center for Journalists with the support of WHO. 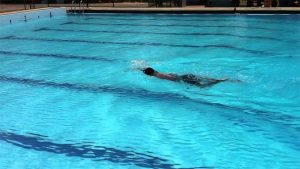