On September 10, a television production team announced starting The Poet Idol, supposedly the first reality show in Nepali poetry. The show that will decide winners also through voting also revealed its judges during the event.

The Poet Idol is not a franchise show as most reality shows in Nepal are. Aman Pratap Adhikary, the show’s director, says, “With a goal to go global, we have introduced the reality show that would purely be dedicated to Nepali poetry.”

The very different nature of the show has made The Poet Idol face an uncertain future whereas stakeholders are also divided about its possible contribution to Nepali poetry in the future.

Besides the National Poetry Festival, there are other national-level poem competitions too that have been contributing to the growth of Nepali poetry.

Most of the competitions are announced through public notices; poems are collected either through the post office or by mail. Lastly, the poems are evaluated by the judges and the one with the highest score wins the competition. This means the judges decide the winner without meeting the poets.

Meanwhile, the format of competitions in Nepali poetry is changing in the digital age, and The Poet Idol takes it one step further. After the Covid outbreak in 2020, many competitions took place virtually. Poets either send their poems in audio/audiovisual formats and organisers choose the best one from the submissions.

The judges determine the winner by reading the poem and listening to the recitation of the poem by the poet.

But, The Poet Idol is even more different from that.

Director Aman Pratap Adhikary says he is doing this show in memory of his father, Kshetra Pratap Adhikary, a popular poet and songwriter who is also referred to as Gambesika Kabi (the poet of villages), the title he earned from his anthology, Gambesika Geet (the songs of the villages).

Previously, Adhikary has worked for popular reality shows like Roadies and Ko Bancha Crorepati. In the first edition of The Poet Idol, he listed Biplov Pratik, Upendra Subba, Surakshya Panta and Anup Baral as its judges. Divya Dev will be the host of the show.

According to Adhikary, the initial audition will be held digitally where people from anywhere need to send a two-minute poem in a video. Afterwards, the performances will be brought to the studio, and 14 poets will be selected from there.

Alongside, the audience can also vote for their favourite poet. One poet will be eliminated in each episode. Lastly, the one to get the highest votes from the audience and marks from judges will be announced as The Poet Idol.

The announcement of The Poet Idol has been receiving mixed reviews as far as its contribution to Nepali poetry. Some people are considering it a stunt and some of them are taking it as a best practice to commercialise poems.

With the span of time, the pattern of poem writing has changed significantly and many people believe that this reality show is going to be relevant. People who love slam poetry are openly appreciating the show.

But, there are some dissidents within the poetry fraternity. “Reality shows are supermarkets of the fool; it is an industry to fool the world,” poet Binod Bikram KC says, “It is ridiculous that reality shows beget extraordinary talents. One programme cannot give birth to talents; it needs an entire ecosystem.”

It means the implications of the show in Nepali literature are still not clear. You have to wait and watch. 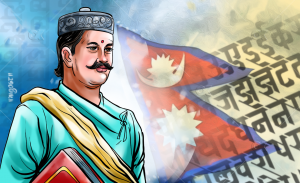