As I walk along the banks of the Bagmati, I observe a lot of things. On one side of the banks, I see a family grieving and performing the last rites of its departed member, while on the other side, I see people paying homage and honouring their forefathers. As I sit there watching, a man takes a bath in the holy river and a foreigner asks me what he is doing.

I tell him he is taking a ‘purifying bath’ in the river before he starts the rituals of Sorha Shraddha.

Sorha Shraddha also known as Pitri Paksha or Mahalaya is a 16-day period in the Hindu calendar when people pay homage to their ancestors or pitri. According to Hindu mythology, the souls of three preceding generations of one’s ancestor reside in a realm between heaven and earth known as pitri lok. This realm is overseen by the god of death, Yama, who takes the spirit of a dying man from earth to the pitri lok.

The offerings made to the priest during the ceremony is believed to reach the three generations caught in pitri lok.

It is often believed that when a person of the fourth generation dies, the first generation shifts to heaven and unites with God. Thus, only the three generations in pitri lok are given shraddha rites, in which Yama plays a significant role.

But, why did this ritual start? To find out, I talk to a few priests who tell me a story about Karna who died in the epic Mahabharata war. After his death, his soul transcended to heaven where he was offered gold and jewels as food. Karna was shocked and did not understand why he was not offered real food so he asked Indra, the lord of Heaven, why he was served gold instead of food. Indra told Karna that he had donated gold all his life, but had never donated food in the name of his ancestors. Unaware of this, Karna told Indra he wanted to make amends. Indra was okay with it and Karna was to return to earth for a 16–day period, so that he could perform the shraddha rituals, and donate food and water.

Keeping that in mind, the practice of Sorha Shraddha has been passed down from one generation to another with its importance still remaining intact. Usually, the eldest son performs the puja while the other sons participate in it. It is conducted with the belief that this will ensure their ancestors’ souls will rest in peace in heaven.

A day before the shraddha, ekchhaki is performed, which is when the sons in the family eat only one meal for the day which usually consists of roti and vegetables without oil, spices or salt in it. The next day, the one who performs the shraddha must take a purifying dip before the ritual starts.

After that, the shraddha is performed bare-chested, as the position of the sacred thread, janai, worn by him needs to be changed multiple times during the ceremony. The shraddha involves pinda-daan, which is an offering to the ancestors of pinda (cooked rice or barley flour balls mixed with ghee and black sesame seeds). It is then followed by prayers to Lord Vishnu and Yama, the god of death.

As per Hindu mythology, every individual who wants to perform this ritual should do it on the same tithi that one of their ancestors died on. During this period, the senior male member of the family gives tarpan (water) to the three preceding generations every day depending upon the death anniversary on the basis of the Hindu traditional calendar called patro.

One of the priests who was performing the rituals for a family says, “It is compulsory that the shraddha is performed by a son to ensure that the soul of the ancestor goes to heaven.”

He further mentions that if the ancestors are content with the shraddhas, they will bestow health, wealth, knowledge and longevity, and ultimately heaven and salvation upon the one who performs it.

The end of Mahalaya marks the beginning of Dashain, the biggest festival of Hindus celebrated with a lot of fervour across the world. 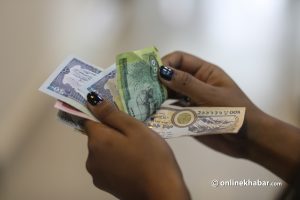