Slugging it out on two wheels: the Langtang ride I

There is nothing like taking a holiday break, to escape the daily grind, the urban chaos, the stifling greenhouse gases, and to say the least to raise your spirits, down in the dumps. Some even like to inject a dose of adventure, too, into such escapades.

For some, it’s just plain sightseeing tours to new places, a pilgrimage or cities. But some are wired differently. Their reading of an adventure is to go off the beaten track, discover the wild and the wacky—something new, fresh, if not, the funkiest. Some even dare to push borders and boundaries.

I happened to know one such swashbuckling duo, Khashing Rai and Shishir Joshi. In 2018, they dared to redefine the concept of conventional trekking by walking bare feet for four consecutive days to Budhinandha Tal, far-west Nepal, Bajura (read the story) to an elevation of 4,600 m with nothing more than Wai Wai (noodles) and chiura (beaten rice) for food, and no warmth of a bed since the deserted trail had no teahouses or lodges. Brave? I thought they were raving mad.

In 2019, with the Dashain festival around the corner, the duo planned a trip, on wheels (mountain bikes), to the Langtang Valley, which also happens to be a popular trekking destination. Well, in other words, their destination was “the land of the ox.” In Tibetan dialect, ‘Lang’ stands for land, and ‘tang’ translates to an ox.

The valley is also well known for spectacular views of glaciers and needless to write, peerless pastoral beauty. They’d set their sights on Kyangjin Gompa (4,300 m), nestled at the footholds of the iconic peak, the Langtang Lirung. The trip this time did not sound far-out, but it was no picnic.

The monsoon had not fully dissipated as it came late last year, but that did not matter. The trip was set in stone. The duo this time was to be accompanied by an old compadre Diwash Pradhan and two lady friends,  Anamika Ghothane (Gurung) and Rojisha Limbu, both in their early twenties. Diwash and Khashing had done a ride with me to Upper Mustang in October 2018.

Anamica and Rojisha are registered nurses by profession. Although they have been riding their mountain bikes for the last four years, this was their first-ever tough ride on a gnarly terrain that included rocks, washouts, ruts, loose sand, loose gravel, steep slopes, and impossible inclines. What’s more, the trip included more than 40 percent lugging on extreme inclines, and steep gradients.

Khashing, as the team leader, had briefed every member of the team of the possible hardships and also warned them, especially the women, about the shouldering the bikes. Anamica and Rojisha appeared resolute. They did not even bat an eyelid when Khashing put in the bare facts. Tough as old boots, Shishir did not care. Diwash, not used to technical riding, seemed a little uncertain. “What of it, if the ladies can do it, why can’t I?” he mused.

As it turned out, Shishir changed his mind at the last hour. He said he’d trek instead. Very like him, always unpredictable. He wanted to explore further to the Gan Jala Pass (5,300 m). Coincidentally, the cycling route the group was doing from Syabru Besi to Kyanjin Gompa was the same. The route went further from the gompa to highlands like Tserko Ri and finally the Gan Jala Pass, a key trekking destination in the Langtang region.

Shishir decided he’d tag along with his cycling comrades on foot, help the ladies out on tough sections, and then part company after Kyanjin Gompa. Sounded very out of the ordinary, but not unlike Shishir, though. Catching up with the cyclists for him was a breeze as the terrain was virtually grueling uphill, and the push-and-carry made the ride nothing short of a snail-pace.

After month-long planning, the group finally left for Syabru Besi (also Syaphru Besi) in the second week of September 2019. The trip was scheduled for a week. The buses to Shyabru Besi had changed the usual route from Jhor or Kakani to the Galchhi-Devighat highway (as both the old highways were in bad shape). The road after Galchhi (a point of Prithvi Highway), went along the Trishuli River to Nuwakot with Devighat en-route.

The scheduled buses shuttled the travellers from Machhapokhari, Balaju Bypass. For the first-timer, the bus park can be a nasty surprise to watch the chaotic fuss.

Khashing looked worried that the bumpy ride might ruin the bicycles loaded on the roof of the bus. It reminded him of the Upper Mustang trip mishap when one of the bicycles had a tyre slashed open by some sharp object on the bus-roof. He made it a point to keep checking as the bus stopped at Thade Dhunche, and Thulo Barkhu until they finally arrived at the kick-off point of their trip, Syabru Besi (2,380 m), Rasuwa district.

As the small but busy town nestled at the base of soaring hills on three sides, the Bhote Koshi tumbled down by its side, making quite a rumble. Mostly hotels and teashops lined the main bazaar. To their surprise, the crowd happened to include more backpack toting foreign tourists, milling around the street, than the locals. After checking into a roadside lodge and a little refreshment, the gang took a stroll along the street. By and by,  at a  tea stall, over a cup of tea, they overheard a fellow talking about a hot spring very close to the lodge, they’d put up. They decided to have a look-see.  It took them hardly a half-an-hour to get to the spot, located at the confluence of the Langtang Khola and the Bhote Koshi. But nobody relished the idea of taking a dip as the water looked sullied.

After a layover at the lodge, the group warmed up for the ride the next morning. The destination for the day was Sherpa Gaun, nine kilometres away. Yes, everybody looked excited, Anamica and Rojisha the most. They just could not wait to hop on to their saddles. If Khashing appeared engrossed as the skipper, Diwash seemed a little apprehensive. Shishir remained cool as a cucumber. He gave the ladies a tip or two about the proper handling of the bike on rough trails.

As it turned out, the dirt track was not easy sailing. A recent landslip seemed to have strewn the track with rocky debris.

It was time to stop for breakfast. The group chose a teahouse by the bank of the Langtang River.  As the turquoise water tumbled south over rocks and boulders creating white feathers, the fast current formed foam-lipped eddies near the banks. The opposite bank rose to lush towering hills.

So far, so good. No hitch-ups, up until then. Everybody did their best. Shishir did well to keep pace on foot. The lunch was scheduled for Khangjim. After a filling breakfast, a little breather, and having feasted on the pristine landscape, the group stretched themselves up to hop onto their saddles.

After breaking a sweat for something like three hours, they sighted a small habitation, the pit stop for lunch. “That’s Khangjim,” announced Khashing. Time for lunch. Everybody went for the cherished dal-bhat. That reminds me of my 12-day cycling tour to the Upper Mustang when the all-time favourite for our group for lunch was dal-bhat, each day, hands down. Dal-bhat was a reasonable Rs 150.00 (veg). Non-veg was Rs 200.00. “The charges here for lunch is much cheaper than what we paid in Mustang, guys,” commented Diwash, looking a little surprised.

After a brief respite, the group was all set to spin. “On to Sherpa Gaun, our stopover for the day, guys,” called out Khashing. The expected time of arrival at Sherpa Gaun was nearly three hours away. Most of the tracks were rideable but going uphill. The lush vegetation gradually was being replaced by bare hills and scrubland as they gained elevation. The weather remained clear and the air cool with a hint of chill.

Langtang National Park is known for a rich and biodiverse flora and fauna. It records more than 1,000 species of vegetation with quite a number of endemic ones. To name a few, the forest is home to sal (Shorea robusta), chirpine ((Pinus roxburghii), Nepalese alder, silver fir, hemlock, and the most common rhododendron. An abundance of birch in Kyangjin, pines in Thulo Syabru and rhododendron mixed forest at Thadepati are noteworthy. The vegetation gradually shifts with the change in the altitude.

The park is equally rich in fauna such as musk deer, Himalayan tahr, Himalayan black bear, serow, the elusive snow leopard (still at a risk status), and, by far, the endangered, red panda. The park is also home to more than 250 species of birds including the Himalayan monal (Lophophorus impejanus), the national bird of Nepal, and satyr tragopan (Tragopan satyra).

After pedaling close to three hours on the hill section with a little pushing and occasional carrying on the rocky track, the group arrived at Sherpa Gaun (2,500 m). Surprisingly, Anamica and Rojisha both kept pace with their male partners. Dead beat, the group checked into a lodge for the night. Room tariff again was modestly priced, just Rs 300.00.

Less than a couple of decades ago, Sherpa Gaun was just a scattered hamlet on the hillside, so common about our far-flung regions, living on agriculture—growing potatoes, corn, wheat and barley and doing cattle farming—rearing cows, chickens, goats, sheep including mules and yaks.

The pastoral scenario gradually changed as Sherpa Gaun became a regular stopover for the trekkers doing the Langtang Valley trek. The locals, besides their farming, supplemented their earnings by running lodges and teahouses.

End of Part I. 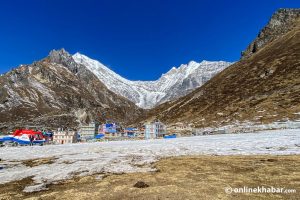 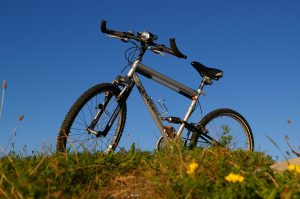 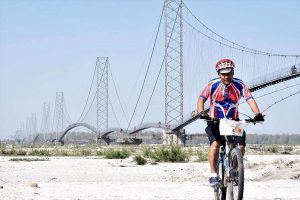 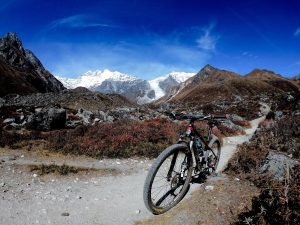 Slugging it out on two wheels: the Langtang ride II 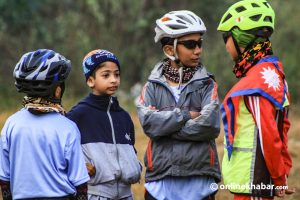