Budhinandha Tal: As isolated and wild as it can get

Over the past decade, trekking in Nepal has witnessed a dramatic upsurge with foreign tourists taking the larger slice. Curiously, recent times have seen more and more Nepali enthusiasts venturing out to far-flung destinations such as Gosaikunda, Muktinath, Upper Mustang, Annapurna circuit, Tilicho, Langtang valley, Phoksundo, Annapurna base camp, Mardi Himal . . . you name it.

As it turns out, bitten by the backpacking bug, this wanderlust for the Nepalese appears not to be restricted to the established norms–some have gone even further with bolder ideas on their mind. Today, some of these new breeds of trekkers seem to have stretched this concept to the extremes, to whatever it takes to pull it off.

Recently, Khashing Rai and Shishir Raj Joshi, an adventurous duo, did an off-the-beaten-track destination in West Nepal, which dared to redefine the concept of conventional trekking.

Their 13-day trek to the Budhinandha Tal (lake), a pilgrimage site in one of the remotest part of West Nepal, Bajura, included almost 4 days of barefoot walking braving an elevation of 4,600 meters. No small feat, right? Sounded impossible to me!

“What really drove us to it was our passion and taste for the wild and untamed adventure far removed off the beaten track regardless of the hardships and high risks involved, “shared the duo their feelings and excitement with me. To me, it sounded nothing short of sheer madness and I cannot even dare dream of doing it ever. BRRRRR!!!!

The journey kicked-off with a 30-hour bus ride to Martadi, Bajura west Nepal, 400 km plus from Kathmandu, via Attariya on the East-West highway. 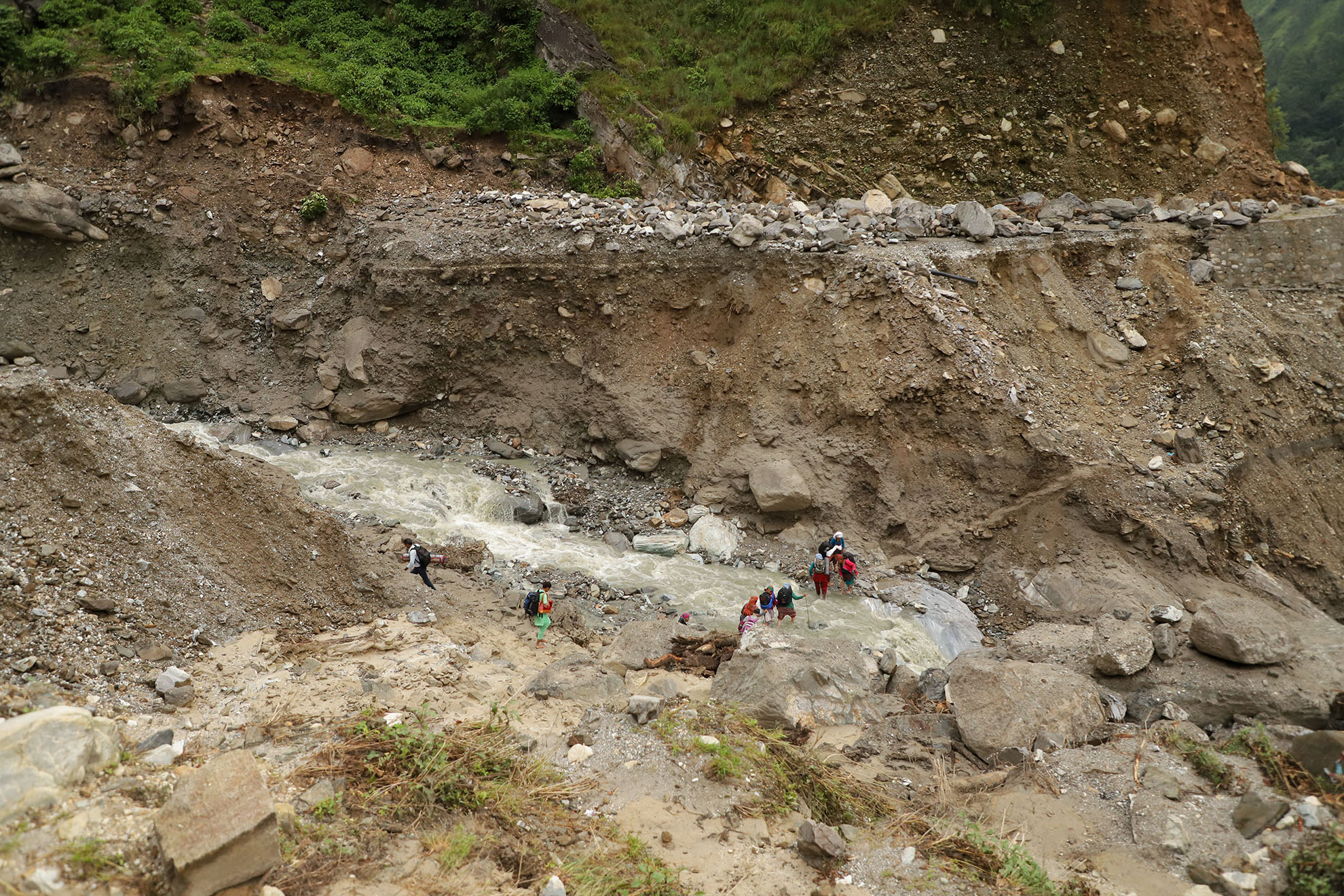 “Given the washed out road (in the pic), the pilgrims (including us) had to take a diversion by crossing a river to the waiting local jeeps to shuttle us to Martadi.” “The trek started from the town of Kolti (1,300m) and we hit the trail that rapidly gained elevation. The ascent was steep and the uphill climb was grueling. In two days we would be at an elevation exceeding 4,000 meters.”

Day 2: Local pilgrims footing it on the barren highland meadows. At this point, priests from Nuri Gaon, stopped to gather all the members of the pilgrimage together ensuring that everyone was accounted for. The caravan proceeded after that at a slow pace.

The occasion happened to be the auspicious day of the annual Janai Purnima festival (the sacred full moon day of Shrawan/Bhadra, or August/September, when Hindu men change their janai (the holy thread) worn across their chests, especially the Brahamins and Chhetriyas.

Each year the inhabitants of Nyauli Gaon, Kolti and nearby villages of Martadi visit the Budhinandha Tal to celebrate this festival. The trail leading into the mountains was completely isolated with no signs of habitation, tea-houses or even a single lodge, en route to Budhinandha Tal. Due to thick fog, the visibility at high elevations was reduced to no more than 5 yards. Further, this trail is shrouded in deep mystery as every year one or two local devotees are reported missing, never to be found again. 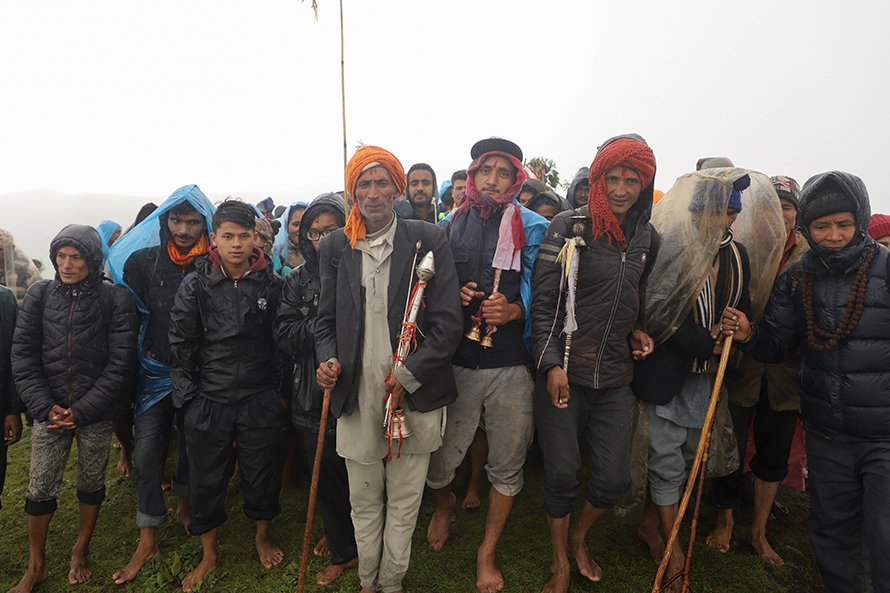 The priests from Nuri Gaon, close by Kolti, lead the pilgrimage and according to the local religious norms, none is supposed to go past the revered priests or break the group formation. Curiously, the priests and most of the devotees start on their bare feet right from the beginning, that is, from Nuri Gaon or Kolti. “Shishir and I shed our shoes at a place called Chhapre Odar.”

Resting point near Chhapre Odar: Here the devotees shared among themselves their water and food brought along from home. To go by the local religious belief, rice cannot be partaken of during the entire trip, so the devotees carry along eatables like roti(local bread), chiura (beaten rice), curry, achars (pickle) and the like. “We were lucky as the devotees offered food to us too.”

The religious rites at Chari Daha also include bratabhanda rituals, religious rites performed on young boys who have reached 14 years, announcing their entry into adulthood. According to the local belief, bratabandhas performed at the holy pond brings good luck to boys. Stoically, putting up with the harsh highland hardships!  Pilgrims taking shelter from the rain with the aid of colorful plastic sheets. Rain was expected, but the surprising fact that you were not supposed to use an umbrella, was least expected. “Shishir and I wanted to put up an umbrella to protect our camera and gear from the rain but the priests advised us not to.”

Dhauli Odar–the last day of our trek to Budhinandha Tal. “While we pitched our tent next to the odar (cave), the devotees retired for the night in the cave, which surprisingly accommodated the horde of pilgrims, sheltering them from the rains.”

Women huddle together in the cave to fight off the cold. The temperature dipped below zero at night so to shake off that feeling, they broke into singing bhajans (religious songs) throughout the night.

The last leg of the journey on bare feet proved very tricky as it meant negotiating a steep climb on the face of a rocky hill, both slippery and treacherous.

Finally the destination! Budhinandha Tal situated at an elevation of approximately 4,600 meters. The devotees take a holy dip(at 4,600m !), perform puja and prepare for a hasty retreat to back home.

The air-strip at Kolti–an option if you wish to fly from or back to Nepalgunj.

Wow! That was one heck of a trek! Footing it bare-feet on a treacherous trail that went as high as 4,600 meters from sea level with nothing more than chiura and Wai Wai for lunch and no warmth of a bed of a lodge other trekking destinations offer at the end of a tiring day, it was just insane.

When last I met the duo, they talked about doing a new expedition, apparently a wild one . . . maybe wilder and crazier than the last! Nothing is predictable with the daredevil duo, Khashing and Shishir!  Maybe they’re already busy plotting their next big adventure to an uncharted godforsaken destination . . . right NOW!