Can culture be tasted? Why not! In fact, it is said by Deborah Cater, a travel writer, that you have to taste the culture to understand it. Different ethnic groups have their unique delicacy which reflects a huge part of their culture.

Nepal is diverse socially and culturally and so is diverse in culinary heritage. Nepali cuisine has much more than just dal-bhat-tarkari and momos. Here, we bring some of the foods of various ethnic groups of Nepal that you can try:

Ghonghis are basically snails found in mud-water in paddy fields and other water sources. It is eaten as a delicacy by the Tharu community of the Terai region. Ghonghis are cleaned multiple times, then boiled and cooked like regular curry. The Tharu people generally eat these snails by sucking the meat out of their shells of these snails.

Sargemba is a blood sausage, made by stuffing pig blood, rice, wild edible moss known as yangben, and spices into pig intestines. It is one of the traditional ethnic foods of Rai and Limbu communities living in eastern Nepal. The sausage is boiled in hot water and fried.

Rikikur is a savoury potato and buckwheat pancake. It is one of the much-loved delicacies of the Sherpa community. It is cooked by mixing finely grated potato, buckwheat, and seasonings and swallow frying the mixture in the pan.

Kanchemba is a kind of fries made of buckwheat. It is a much-loved food of Thakalis, often eaten with spicy pickle of timmur and chilly. To make this Thakali snack, first, a dough is prepared by cooking buckwheat flour in boiling water. And, small fingers are made of that dough and fried.

Dalpetti is a major delicacy of the Nuniya community of the eastern and central Terai regions. This dish is a mixture of lentils’ soup and roti (chapati in the local language). When preparing this dish, they first cook the lentils’ soup and then add the crumbs of chapati to the lentils. The people of the Nuniya community generally have this dish for dinner.

Thekuwa is one of the signature delicacies of the Maithili people. Thekuwa is basically a type of sweet cookie deep fried in ghee or oil. Thekuwa also stands synonymous with the Chhath festival.

Yomari is a delicate food associated with the Newar community of Nepal. Like a dumpling, a dough is prepared to resemble the one half of Shadkona (two overlapping triangles) and stuffing Chaku, Khuwa & meat. But, nowadays people have become more experimental and we find Yomari stuffing Khuwa & minced meat as well.

Bagiya (or Pithha) is also a dumpling made out of rice flour and the interior filled with sweet ingredients. It is the delicacy of the Maithil and Tharu communities of Nepal as well as India. The sweet ingredients filled inside the dough of this food are Chaku, vegetables, and fried items. Bagiya resembles a shape of candy packed without two tails in the alternate edges. Bagiya is a must in the festival of Deepawali (Tihar) and plays an important role in the Tharu society. 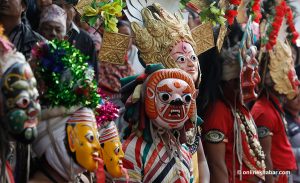