It is said yomari was first made by a Newa: couple working in the field of Panauti. Since rice was the prime harvest, the couple decided to use the harvest and make yomari out of it. Also, since it was winter, they filled it with chaku (molasses) to increase body heat. As a part of the community, the couple also shared their harvest and yomaris with the neighbours.

Another story is of Chhinnapatta Maiju and yomari, but this yomari is about the fig. According to cultural expert and retired Nepal Bhasa professor at Tribhuvan University, Chunda Bajracharya, “In this folklore, we hear the story about two sisters. The elder is Chhinnapatta Maiju, who was disliked by her mother. She had a goat as her friend. Her mother killed her beloved goat and Chhinnapatta took the bones out and buried them in the ground. It is said a fig  tree grew out of there and she used to spend more time there.”

She continues, “One day when she was up in the tree, lakhe and lasi: (a demon couple) came there and tricked her into bringing the fig down to them. Chinnapatta got kidnapped and then was taken to their abode. The demon couple directed her to make roti (flatbread) for them. While in the kitchen, a mouse came to Chinnapatta and asked for roti. The mouse, in return for the roti, warned her that the demon couple were planning to eat her, so she better run with all the jewels they had stored. Chinnapatta Maiju adhered to it and went home with the jewels.”

“Seeing her coming back with the jewels, the mother questioned her on what happened. After Chinnapatta briefed them, the mother directed her younger daughter to get kidnapped and get more jewels from the couple. She did, but she ignored the mouse unlike her sister and failed to get the warning. The demon couple then slept with the girl in between and ate her.”

The signature shape of the yomari is also said to resemble the fig.

As the day is celebrated in winter, people also follow the tradition of sitting in front of makal (traditional firepots) to keep themselves warm. “Many also eat roasted eggs, garlic, and potatoes while sitting around the fire. However, the tradition is rarely seen nowadays,” Bajracharya laments.

Children also go around to ask for yomari where the households share their fortune by giving it back to the community. Charity on the day is also very common, she adds.

Chef Santosh Sah made yomari famous in the international cooking show Masterchef UK 2020. Looking at that, many are inclining towards tasting this local delicacy. With its newfound fame and the local festival in mind, here is how you can enjoy a tasty yomari at your own home:

You need a bowl of rice flour. You also need boiled water to make the dough.

Boil water in a pot. Then, put the hot water in the rice flour, and mix them together. Knead the mixture and make it into a dough. [You have to be careful as the mixture can be hot to touch].

When the dough is ready, wrap the dough in a cotton cloth. Leave it aside for half an hour or overnight.

In a pan or a pot, put water and chaku. With heat, the chaku turns into liquid. The mixture should be consistent and thick but runny. Mix black sesame seeds and powder into the pan, and mix all. Add cinnamon or cardamom for taste. Put it aside to cool down.

Mix a bit of water and make it a paste. In the paste, mix coconut, sugar, and almonds. Add cinnamon or cardamom for taste. And put it aside to cool down.

Put oil on the palm. Take a dollop of the dough into your hands and give it the shape. Start on one side, roll the dough between your palms for an elongated tail or lower half of the yomari. On the top, poke a hole. With your index finger slowly start pressing and rolling the dough in your palms. Make the base like a vessel to put your fillings.

Put a spoon of your fillings and cover the opening by slowly pressing the opening with your hands. Give shape to the top any way you like it.

Continue the process to make as many yomaris as you want.

Cooking yomaris is just like making momos. So, you can use the same pot you would use to make momos.

Put the water to boil.

Oil the pot base before putting in the yomaris. Make sure there are gaps for the yomaris so that they do not stick.

When the water boils, keep the base on top of that for yomaris to cook.

Take the hot yomaris into a plate and serve it.

Garnish it with chopped almonds or chocolate syrup or any ingredient you would like before serving. 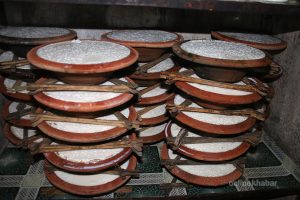