The suspension bridge over Kaligandaki from where the bunjee jump will be done, in Kusma, Parvat.

Kusma, a town in western Nepal, is launching two new attractions for tourists visiting the place this weekend.

Both domestic and foreign visitors can enjoy bunjee jump and swing services in Kusma, the district headquarters of Parvat, which is just around 55 km away from Pokhara, the country’s tourism capital.

The company’s chairman Raju Karki also claims the swing is also one of the highest in the world.

The company has announced different packages for the visitors including transport services from and to Pokhara. 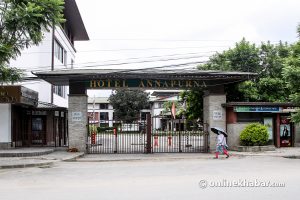 Hotels in Nepal losing Rs 1.8 billion to Covid-19 every month