When former British Gurkha soldier, Nirmal Purja, floated a proposal that he climb 14 highest mountains of the world in one season of seven months, he was called a ‘foolhardy’ by many. No one was ready to fund his project, saying it was impossible.

However, Purja, a Nepali origin climber, was so much determined in his mission that he named the project ‘Possible’ and started off this spring from Nepal.

Purja, popularly called Nims by the mountaineering community in Nepal, began the mission from notorious Annapurna in the final week of April. So far, he has already climbed Annapurna, Dhaulagiri and Kanchenjunga. In the first phase of his mission, he has three more to go–Everest, Makalu and Lhotse.

While continuing his bid for the world record, which would give him a personal privilege, Purja has also carried a humanitarian mission of rescuing climbers from the dangerous mountains.

While climbing Annapurna and Dhaulagiri, Purja and his team rescued three foreign climbers, including one Malaysian and two Indians. However, all of them died for the want of timely treatment later.

This was not the first time that during a world record climb Purja has been involved in a rescue. 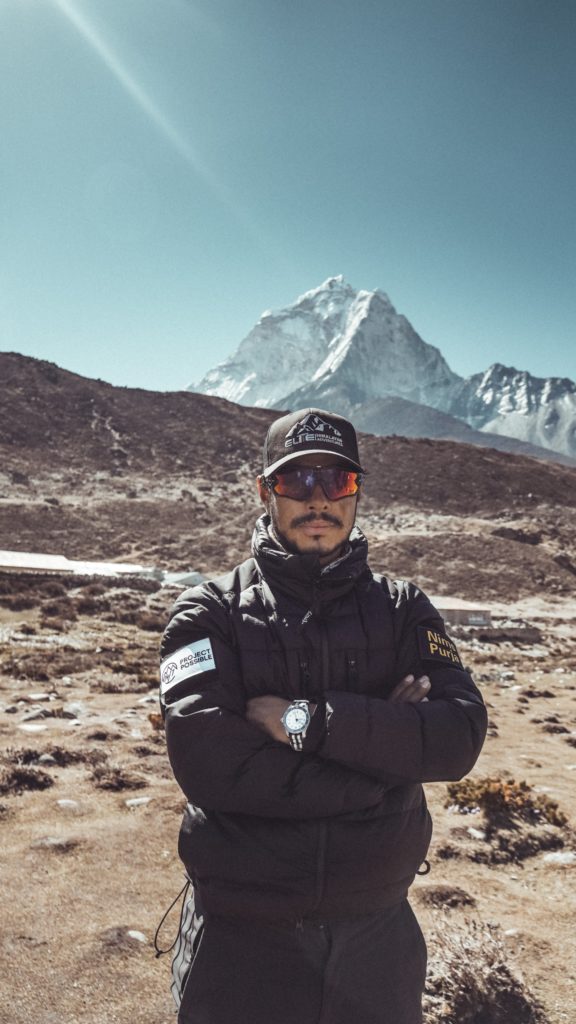 “When I first started, my training was geared to climbing Everest without oxygen”, he says, “In 2016, I was executing a solo attempt on Everest when I came across a fellow climber who had been passed by other climbers. Being a Gurkha and a former member of the Special Forces, we never leave any man behind. I used everything I could to bring her below the ‘death zone’ for a rescue. I have never been that tired before.”

Meanwhile, Purja says he will plan to summit Everest, Makalu and Lhotse within a span of three days, beating his previous record of five days and 10 hours.

“This is showing what the human body is capable of, that we can all do great things if we challenge our mind and look after our bodies,”he explains, “I have been blessed with the physiology to attempt this challenge and my training with the British Forces has 100% put me in an even better position to do this.”

Claiming he will support two charity organisations from proceeds of his project, Purja has called on sponsors to contribute to his mission.

“I will always stop to help someone on the mountains. I want to continue completing this challenge because my main goal is to come back and raise funding and awareness for the two charities that are close to my heart,” he says, claiming his team has been cutting on climbing expenses to give more to the charities.

For funding – Go fund me page