Six more justices at Nepal’s Supreme Court have boycotted hearings set by controversial Chief Justice Gopal Prasad Parajuli, a day after one of the senior-most justices accused the CJ Parajuli of working past the age of retirement.

Following Rana’s refusal to sit alongside Parajuli on Monday, the hearing in the case had been postponed. According to sources, when proceedings were about to begin in the hearing, Rana stood up and read out a statement. In the statement, he had said that Parajuli ought to have retired in July last year.

Parajuli has been dragged into controversy after reports surfaced claiming that he forged his education certificates to lower his age. His decisions in cases related to medical colleges have also been controversial. 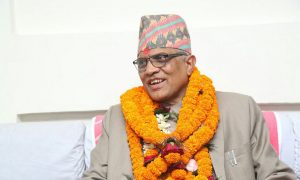