Here’s a summary of important, ignored and interesting reports from Tuesday to kickstart your Wednesday.

NCP to discuss MCC deal in the central committee

The ruling Nepal Communist Party has decided to discuss the controversial Millennium Challenge Corporation compact signed between the governments of the United States and Nepal in its central committee before the government forwards it to Parliament seeking approval. The ruling party made the decision after its standing committee remained divided over the 2017 deal as some members viewed the deal was aimed at persuading Nepal to join the US government’s Indo-Pacific Strategy.

The party’s next central committee is scheduled to begin on Wednesday next week (January 29) and it is expected to last for around one week.

Six persons died and 15 others sustained injuries in a minitruck accident in Nilakantha municipality in Dhading district, around 90 km northwest of Kathmandu, on Tuesday afternoon.

SP Rabindra Regmi, the chief of the District Police Office, says five of the injured are critical and they have been sent to the capital for further treatment. Others are admitted to the local health facilities of the district.

The minitruck was carrying locals of Bhulbhule, Nilakantha municipality-2, who were returning from a shrine in Jwalamukhi rural municipality-4 of the district.

After the Rastriya Janata Party Nepal extended its support to the ruling Nepal Communist Party’s candidate for the speaker, many have speculated that the two parties are preparing for a long-term partnership and the RJPN could join the current government also. Amidst this, five central leaders of the party have warned the party leadership against making such serious decisions without discussing them in the party.

Sarvendra Nath Shukla, Brishesh Chandra Lal, Govinda Chaudhary, Ramesh Prasad Yadav and Bijay Kumar Singh have said the party should not join the government unless its demands about the constitution amendment and the release of lawmaker Resham Chaudhary and other party cadres are met.

As the Kathmandu District Police Office issued a warrant allowing police to arrest singer Astha Raut, his father Hari Bahadur, who also happens to be a singer, has requested the security personnel not to arrest her arguing she did not have any ill intent behind her quarrel with a policewoman at the Tribhuvan International Airport last week. In an interview with Onlinekhabar, Hari Bahadur apologised to the police and the public on behalf of his daughter. Astha Raut has not returned home from Sikkim of India where she attended a musical show last week.

Meanwhile, the father also complained that the media and Nepal Police blew the incident out of proportion.

Notorious gangster Deepak Manange, who is also a member of the Gandaki Provincial Assembly representing a Manang constituency, has reportedly beaten up on Milan Gurung, the Kaski district president of All Nepal Football Association. While Gurung was preparing to welcome the Chief Minister Prithvi Subba Gurung to the inauguration function of Chief Minister Cup Football, Manange attacked him arguing the Gurung-led team could not manage the event appropriately. 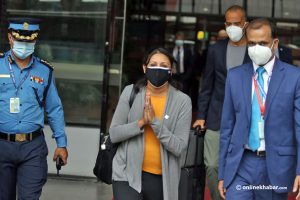