Today is the Loktantra Day (Democracy Day) in Nepal. Then King Gyanendra, on this day, in 2006, had reinstated the dissolved House of Representatives as a result of a 19-day-long people’s revolution popularly known as People Movement/Janaandolan II.

This was a movement against the royal coup staged by King Gyanendra in February 2005 that eventually resulted in the abolition of the 240-year-long monarchy in the country.

Here, let’s mark the celebration of this historic day that paved the way for a federal democratic republic, by getting to know the timeline of the events that happened in those 19 days of revolution.

February 1, 2005: King Gyanendra dismissed the cabinet led by Sher Bahadur Deuba and took all executive powers into his hand.

November 22, 2005: The signing of a twelve-point agreement between the Seven Parties’ Alliance (SPA) and the Unified Communist Party of Nepal ( Maoist) in New Delhi to wage a unified mass movement against the monarchy built the foundation for the Janaandolan II.

The SPA announced a nationwide peaceful pro-democracy people’s movement. Initially, it was a nationwide general four-day strike, but it lasted for 19 days. On the first day of the movement, more than 450 protestors were arrested and many political activists were kept under house arrest.

Also, the Maoists attacked Malangwa, Sarlahi in central Terai as King Gyanendra had gone to Birgunj, Parsa, for inaugurating the World Hindu Convention despite several warnings from political parties.

Demonstrations across Nepal rippled; buildings were vandalised; tyres were burnt; roads were blocked.

King Gyanendra retaliated against the demonstrations by imposing a curfew in Kathmandu with a ban on mass meetings, assemblies, rallies, and sit-in programmes within Kathmandu’s Ring Road. Telephone and mobile phone connections were suspended.

Also, around 25 people died in a clash between security forces and the Maoists in western Nepal, mainly in Kapilvastu and Rupandehi. Likewise, a demonstrator in Chitwan was shot dead.

The Maoists had blocked all the major highways and 12-hour curfews had become a schedule. The SPA called for a tax boycott and declared to continue the movement indefinitely.

Many civil servants and professionals comprising lawyers, teachers, engineers, professors, doctors and journalists and many others joined the movement.

The movement intensified in the following days, with crowds increasing to sizes estimated at 100,000 to 200,000 in Kathmandu.

Curfews for the daytime were lifted. However, more than 500 professionals including journalists, lawyers, human rights activists, and many other agitators were arrested by the security forces.

It was New Year’s Day. On this occasion, addressing the nation, the king called the political parties for the talks. However, the parties rejected the call continued the protest. Likewise, the government also intensified its brutality against the demonstrators.

The king imposed a 25-hour curfew in Kathmandu. Likewise, three protestors were killed in Kalanki of the city while defying the curfew orders. Also, police stations distributing curfew passes to the media and the UN staffers were closed down and the passes were denied.

On the very day, the king put forth an offer to nominate Nepali Congress leader, Krishna Prasad Bhattarai, as the new prime minister. However, he refused.

Protests reached their peak with over 500,000 agitators on the street. Several individuals were killed and hundreds were injured with police firing bullets and tear gas shells, and charging batons.

In the same evening, on a television statement, the king announced a new offer stating he would return all the executive powers to the people and requested the SPA to recommend the name of the prime minister who would run the government. But, this was also refused.

Thousands of people filled Kathmandu’s 27-km Ring Road surrounding the city. The leaders presented their three core demands that included the reinstatement of the dissolved parliament, formation of an all-party government, and elections to a constituent assembly (that would draft a new constitution). Also, the protesters in a huge number marched towards the palace defying the curfew orders.

There was an 11-hour curfew and ‘shoot-at-sight’ order in Kathmandu. Despite such a situation, the SPA leaders announced a “mammoth Ring Road rally” for April 25.

Schools, shops, businesses and government offices were closed for 19 days.

Finally, after 19 days of the protests, the movement came to its climax with King Gyanendra reinstating the old House of Representatives, which was dissolved in February 2005. The king called upon the SPA to unify the nation. And, the SPA accepted it. 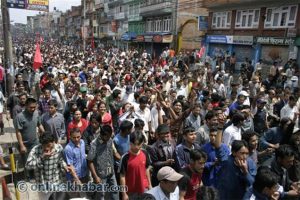