Health Minister: Forget past. Govt is using all of its resources to prevent coronavirus epidemic

Though the World Health Organisation has put Nepal on a list of high-risk countries in terms of coronavirus infection as it borders China, where the epicentre of the current epidemic lies, experts say the Nepal government is ill-prepared to fight any likely crisis. They accuse the government of neglecting the risk as it does not have sufficient space for quarantine and isolation wards at hospitals. The government has not made any decision about suspending international flights and restricting its own citizens’ overseas movement.

When Onlinekhabar spoke to Health Minister Bhanu Bhakta Dhakal on Monday to question why the government is carefree in such a serious issue, the minister tried to assure that the government was doing its best to prevent its people from the fatal infection. Excerpts:

As the World Health Organisation has suggested high alerts against coronavirus spread in Nepal also, what is the government’s plan to protect its citizens?

The Cabinet meeting on March 1 formed a committee headed by Deputy Prime Minister Ishwar Pokharel to spearhead all the tasks needed to be done about this issue. This committee is authorised to do all the needful. Likewise, there is another technical team headed by the Chief Secretary. The team looks after how the hospitals are prepared to combat the likely crisis. We have already directed all concerned bodies and local-level hospitals to stay alert and build their competence to manage the situation whenever needed.

But the people are living under the coronavirus terror across the country. As the health minister, can you please assure them that the state looks after them?

Of course! The state is a guardian of its citizens; its role is crucial in such critical situations. We are discussing how to make sure that the public does not feel any sort of lack. We are managing the situation. We have directed the government agencies at border points and the local level to concentrate their efforts on anti-coronavirus campaigns. We are aware that the infection has increased in India also, which we share an open border with.

As of now, if anyone comes to Nepal from eight highly vulnerable countries, they also have to show a certificate that they obtained in the past seven days proving that they are not infected to enter the country so that we can make sure that the virus does not enter Nepal.

The state is not preparing to evacuate its citizens from any other country as it previously did from China, but we will maintain the quarantine site developed in Bhaktapur as it is because it can be used whenever a similar situation emerges in the future. The existing hospitals can provide needful services in those situations.

Our priority is preventing the entrance and spread of coronavirus in the country. We are realistic in our approach. The government is committed to avoiding a shortage of medicines and food supplies. We have not submitted to the epidemic; we will not.

You said you would make the quarantine compulsory for the people coming from affected countries. But no one has restricted their movement as of now. Experts say it is severe negligence.

Yes, the risk is always there because the symptoms do not appear immediately after the infection. But, we have improved the management at the (Kathmandu) airport. Please forget what happened in the past. I want to assure you that the current arrangement of health desk, checkup procedures and caution adopted are different. The government has been using all the resources it has to prepare itself against the epidemic.

How can the people feel assured when the health personnel are complaining that they are at the risk for want of personal protective equipment (PPE)?

The PPE includes the things that we cannot prepare here. We have to import them from elsewhere. We have launched efforts to bring in them through various agencies. Because coronavirus has already spread across the world, the shortage is natural in the international market also. The producing countries retain many sets for themselves. However, we are taking initiatives to import them.

Okay, let’s forget the PPE, honourable minister. But there is also a scarcity of basics such as masks and sanitisers. The hospitals say they do not have enough beds for isolation. How can the people feel rest assured?

At various hospitals of the country, we have recently prepared 155 isolation beds. People think that there are not sufficient isolation beds because both government and private hospitals are unwilling to admit coronavirus-infected persons.

This situation exists until the infection becomes a reality. Then, if any infection case is recorded, the government manages the situation.

So does it mean that the people are terrorised just because the government has failed to counsel them?

No, we have been giving them needful counselling. Fear and protest during such times are worldwide phenomena. We will expand our counselling in the upcoming days. 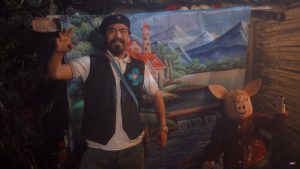 Bachunjel Haskhel: How this 8-minute video gives you a theatrical experience