Skydiving out of a helicopter in the Khumbu region, Hari Budha Magar had one thing on his mind – Everest. Since 2016, Everest has been his dream as he wanted to become the first above-the-knee double amputee to climb the highest mountain on earth.

Over the course of these six years, he has faced multiple setbacks. Firstly, the Nepal government barred double amputees and blind climbers from the mountain. Then, Covid happened, which meant his sponsor pulled out of the project due to financial reasons.

But now, the former British Gurkha and a war veteran has left all that behind as he sets his sight on climbing Everest in 2023 aiming to inspire differently-abled people from all across the globe and prove a point that if given the right opportunity, even they could break the stigma and do wonders.

“I had no mentors or people to look up to when I lost my legs. I want to change that. I want to show people like me that they should not consider quitting on life because there is a lot more than they can do with it,” says Hari Budha Magar.

Hari Budha Magar grew up in the remote village of Mirul in Rolpa in 1979. The place was so remote that they had to walk a week to Ghorahi to buy basic amenities.

“I had a tough childhood. I was born in a shed, walked to school barefoot, wore torn clothes and wrote on stone sledges,” says Magar, adding he was always fascinated by Dhaulagiri that could be seen from this village.

As a child, he was stubborn. When people told him he could not do a particular thing, he would work tirelessly to prove them wrong. That is what made him the first person in his village to pass the final school exam.

“I then joined the British Gurkha and my life changed.”

The amputation and subsequent adventures

Hari Budha Magar started his career in the British Gurkha in 1999 and gave the prime of his life to the English government. He was deployed all over the place and was at the peak of his career. Then, one day, everything changed.

“I was in Afghanistan when I stepped on an improvised explosive device (IED) and my life changed in 2010,” he says.

Hari Budha Magar felt his life was over and he would die but was airlifted to a nearby base. He survived, but to his horror, he lost both his legs and had scars all over his body.

“I was at the peak of my career. When I recall that incident, I become teary. Never in my life had I thought I would lose my legs.”

That took him to a dark place. Irritated by all the pity he was getting, he started to drink heavily. Depressed, he even considered taking his own life.

“But, then, I remembered what it would do to my family. It would’ve broken them.”

“That is when I felt, if you do something worthwhile physically, it will help you mentally too. I realised that it was my second life and wanted to live a positive life.”

Hari Budha Magar says if he knew this earlier, he would not have suffered so much.

“I went through hell because I was unaware of how there were things that I could do. Once I started to get involved in sports and adventure activities, it helped me move on quickly. This is why I want to climb mountains and show the differently-abled people that they can do it too if they put their mind to it,” he says.

It was around 2013 that Hari Budha Magar started to dream about climbing mountains too. A team of army personnel from the British Gurkhas were climbing Everest. And he started talking to Krishna Thapa Magar, the team leader of the Gurkha expedition.

“He came up to me and told me that he wanted to climb too. So in 2016, we came to Kathmandu,” says Krishna. “I didn’t want to judge him. I wanted to give him the confidence and opportunity to fulfil his dream.”

The two came to Nepal and went to Gosaikunda and Annapurna Circuit to check how Hari’s body adapted to high altitude. Happy with his progress, they also climbed Mera Peak.

“I became the first above-the-knee double amputee to climb a mountain over 6,000 metres. I can’t explain how happy I was. I had tears in my eyes. I felt reborn,” says Hari Budha Magar.

Following that, he started to work towards getting to Everest, but then the government, in 2017, barred double amputees from the mountain. He had everything in place to climb Everest in 2018, but as he spent most of the year in a legal battle, his Everest dream was nothing but a dream.

“It was wrong of the government to say that. They cannot tell someone they can’t climb. It’s one’s personal choice. It wasn’t just my fight. It was a fight for everyone,” he says.

The Supreme Court, however, reversed the government’s decision to the delight of many amputee adventurers.

“It was a win for everyone,” says Hari Budha Magar.

To the mountain and beyond

Now that everything is settled, he has set his sights on Everest again. In April, he became the first above-the-knee double amputee to hike all the way to the base camp. A week later, he was on a helicopter, sky diving into the shut Syangboche Airport.

“The sky diving was a once in a lifetime opportunity. It felt great as did the trek to basecamp. I can’t wait to be back,” says Hari Budha Magar.

But, Everest is going to be tough. Only two amputees, both below the knee, have climbed Everest the recent being Chinese climber Xia Boyu in 2018.

“I’ve been talking to Mark Inglis who was the first amputee to climb Everest. He’s been mentoring me on what to expect on the mountain and I’ve been training accordingly,” he says.

Krishna Thapa Magar says that there are going to be many challenges, which is why they will try and get to Nepal during the autumn and climb at least one 7,000-metre mountain.

“We want to see what we need to do to make this as smooth as possible. Hari is very strong, but there will be challenges in some parts of the mountain. That is why we might have to spend a long time and set up a lot more camps,” says Krishna Thapa Magar.

Hari Budha Magar knows it is going to be challenging. He is not worried about climbing steep slopes. What he is dreading are long days that he will have to walk.

“Since my prosthetic climbing legs are short, I will be very slow and that means I will have to carry a lot more resources up the mountain,” he says.

That is why he needs a lot of funding. He says it is going to cost him around USD 300,000 to climb Everest and he is extremely thankful for the people who have helped him so far.

“Funding was hard because we don’t really learn how to do that. I grew up in a remote village. Who will teach me how to crowdfund? But, I’ve learnt a lot over the past few years,” he says.

At the end of the day, Hari Budha Magar wants to create positive change in society. Climbing Everest is just the tip of the iceberg. He wants to do more. He wants to end the stigma surrounding differently-abled people in Nepal and around the world.

“We need to do so much in Nepal for differently-abled people. From poor roads to poor policies, a lot needs to change. I also want to show people that we need to give these people the opportunity to get their life back together. If I am able to do this, I think I will have served my purpose.” 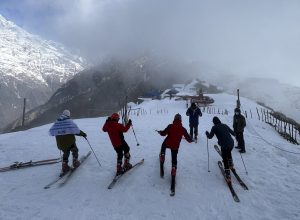