On November 8 and November 9 in 2022, two earthquakes measuring 5.7 and 6.6 on the Richter scale were reported with the epicentres in the Doti district of far-western Nepal. At least six people died and five people were injured when houses collapsed.

A former director general of the Department of Mines and Geology, Somnath Sapkota says such earthquakes do not prevent a major earthquake, but they warn about a possible major disaster.

“According to the study, there has not been a major earthquake in western Nepal since 1505,” he says, “Many earthquakes in Nepal like the one that occurred recently do not play a significant role in reducing the great power stored there. Instead, we should understand such earthquakes as warning bells and start planning for disaster preparedness.”

Geologist Bishal Nath Upreti of Nepal Academy of Science and Technology says that there has not been an earthquake greater than eight rectors in the west of Gorkha for more than 500 years.

According to Upreti, an earthquake in 1505 caused the ground to move up to 20 metres towards western Nepal.

Studies have shown that eastern Nepal was greatly affected by an earthquake in 1255. After that, there was no major earthquake for about 800 years, according to Upreti.

A study in Sikkim has shown that the region has not experienced a major earthquake for about 1,300 years. Because of this, Upreti says that if a big earthquake in that area takes place, millions of Nepali will be affected in eastern Nepal as well. “The earthquakes of 1255 and 1505 were much bigger than the earthquakes of 1933 and 2015,” he says. “Such dangerous earthquakes in Nepal can happen at any time.”

However, even after the 2015 earthquake, geologists are dissatisfied that the government did not do enough to prepare and take precautions. He says the government is not interested in prioritising the early warning systems that have already been developed.

Although it is not possible to determine when an earthquake will occur, a system has been developed that can record underground waves a few seconds before they occur.

“Though the funding for the early earthquake warning system has been raised, it will take more than four years to connect it and build the human resources and technology for it,” he says, “The Ministry of Finance has promised to hand over the budget but we have not yet received it.”

In all these years since the 2015 earthquake, the government has not shown any interest in preparedness against earthquakes in Nepal. He says, “A lack of budget has postponed the work to limit the potential harm.”

According to Upreti, despite the Supreme Court’s order to establish a unique government framework for planning for earthquake disasters and an early warning system, measures have not been implemented.

Sapkota considers the necessity to revise the government’s strategy and working style.

So far, reconstruction operations take place only after earthquakes in Nepal.

“But, houses and structures that are at risk of being destroyed by an earthquake should be repaired, retrofitted and rebuilt as needed to make them earthquake-resistant,” he says.

A former chief executive officer (CEO) of the dissolved National Reconstruction Authority, Sushil Gyewali, says that the damage caused to 32 districts by the 2015 earthquake may repeat at any time in western Nepal.

Out of the approximately 850,000 private houses damaged by the 2015 earthquake in central and eastern Nepal, more than 700,000 have been rebuilt. The majority of the restoration work was completed in 14 severely damaged districts of central Nepal.

“It is vital to apply the information that we have learnt and gained through the reconstruction following the 2015 earthquake, to plan in order to limit the danger caused by future earthquakes in Nepal,” he says. 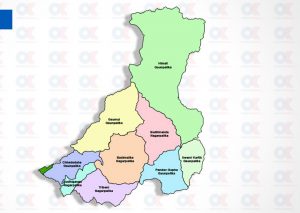