Two foreign climbers have died during their ascent to and descent from the peak of Mount Everest, the tallest mountain of the world, in eastern Nepal on Thursday.

Mira Acharya, a director of the Department of Tourism, informs Onlinekhabar from the base camp that Abdul Wahid Waraich of Switzerland and Liu Puwei of the USA died today. Waraich was returning from the peak but died at the South Col this morning.

Efforts had been made to rescue him, but that failed due to unfavourable weather, Acharya informs, quoting Seven Summit Treks, the expedition management company.

On the other hand, Puwei was on the way to the peak. After reaching the Hillary Step, the climber had experienced some problems and was taken back to the camp IV.

Over 150 climbers have already made it to the peak in the past week this season, according to the government. Now, the favourable weather window has closed and the climbing activities are likely to resume after May 20 only, informs Gyanendra Shrestha, a liaison officer at the base camp. 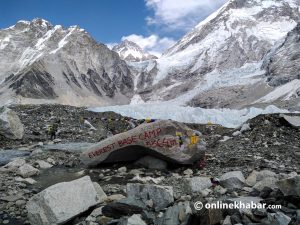