The otherwise joyful face of Sita Ram Kattel ‘Dhurmus’ is without a smile lately. He is stressed not because he is not getting any roles in films or TV shows, but because his dream project, the Gautam Buddha International Cricket Stadium, has hit a brick wall.

Due to the lack of funds, the project has not moved as swiftly as he had hoped. His days are often spent thinking about how and where to manage the funds as, without it, the project’s future is in limbo.

“As soon as I wake up, I get calls from the suppliers asking me when they will get paid,” says the country’s noted comedian-turned-social worker. “I know it is hard for them too as they have trusted me and worked on this project, but right now, there is no cash to pay them.”

According to Kattel, the project owes nearly Rs 30 million to a single contractor. The project in total owes contractors over Rs 93 million, says Mukti Timilsina, the accountant at the Dhurmus-Suntali Foundation. That has resulted in the foundation not being able to pay the workers involved in the construction of the project.

During the festive period, the foundation took a loan from a cooperative to pay the workers, says Kattel. He says it had borrowed nearly Rs 10 million to pay the workers. But since then, it has cut down workers from 313 to 161 as he says it is not possible to pay all of them.

Kattel had hoped that the funding the project would not be hard as a lot of people had said they would help. However, due to Covid-19, the expected funds did not come through.

Last year around January, the project was getting around Rs 700,000 through donations on a daily basis. The number of people visiting the site was quite good too. But, things have changed.

“People used to reserve buses to visit the stadium and look at the progress and help us financially. But, in recent times, we’ve not seen any people,” says Kattel.

According to the foundation, it has spent nearly Rs 400 million on the project to date. However, it says it has only received a little over Rs 300 million in donation and grants.

During a mahayagya (a religious function organised to fundraise) that took place in January 2020, around Rs 690 million was pledged by various donors. However, out of the Rs 690 million, only Rs 88 million has come through. Kattel says that had the remaining amount come through as expected, they would be able to finish the project on time.

“People think that we’ve already received the pledged amount from the mayayagya, but until now, if we convert the goods which we received as donations, we’ve only received Rs 100 million,” says Kattel.

The people who pledged the amount during the mahayagya have gone missing, says the foundation. These people range from parliamentarians to contractors to government officials, claims the foundation.

Members from the foundation and the mahayagya committee members are trying to collect the pledged amount, but not much progress has been made.

“When we call people, many seem to have forgotten that they had pledged a certain amount,” says Timilsina.

But, the show must go

The total cost of the project is estimated to be around Rs 3 billion.

The stadium is taking shape, however. The work on the playing area is almost complete. The work on the stands are in place, but due to the lack of funds, not much has been done apart from laying the foundation.

Kattel says that a lot of time and money has been spent on making of the stand.

In a bid to generate funds for the stadium, a cricket match is being held on February 6 at the stadium itself. Movie stars, singers, cricketers and 40 others from the entertainment industry will take part in the match. 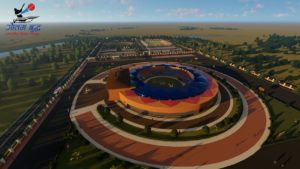