Covid-19 Nepal: Villages are turning into hotspots. What should the govt do now? 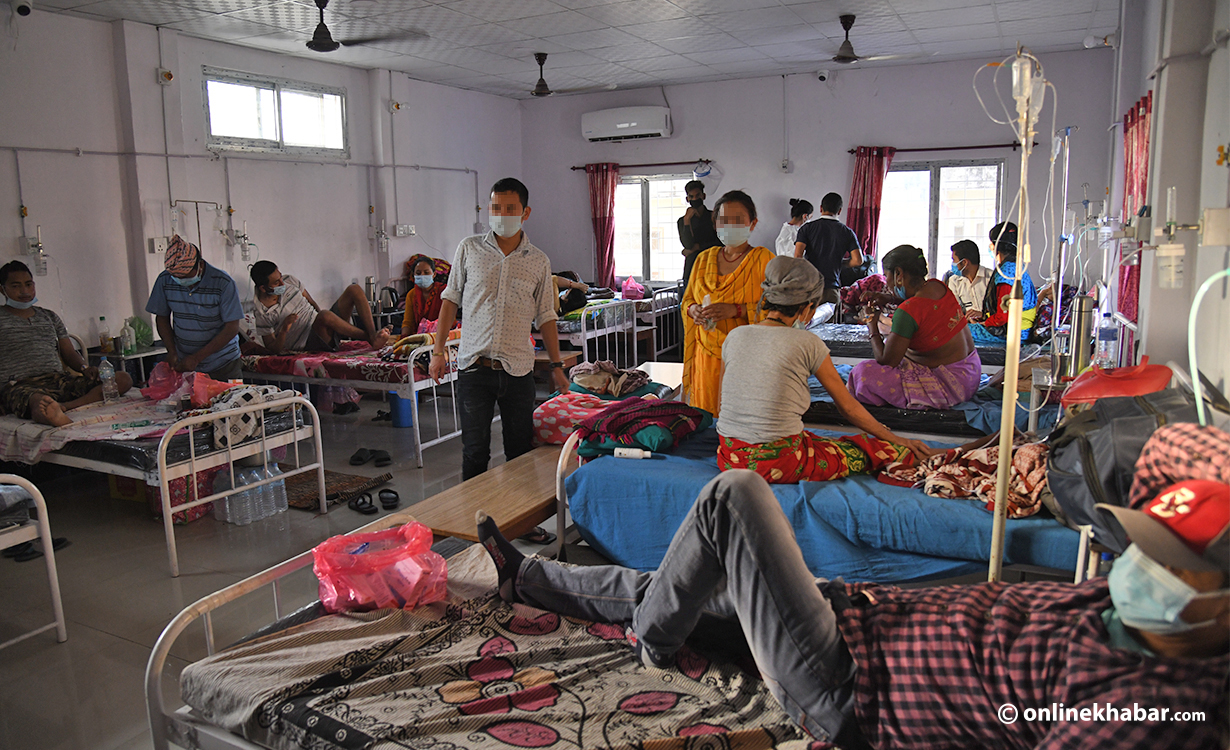 Hospitals in major cities are full of people from rural areas as Covid-19 spreads in villages across the country. Photo: Chandra Bahadur Ale

Three weeks ago, the per-day Covid-19 positivity rate stood at as high as 44.67 per cent. A week later, the infection rate went down to 34.18 per cent and the following week, it went further down to 31.35 per cent.

By this week, the infection rate has already gone below 30 per cent as Sunday, it stood at 28.9 per cent apparently because most parts of the country has been on lockdown for the past 40 days.

But, doctors and health experts say they are concerned as there has been community transmission of Covid-19 in rural parts of Nepal also.

Dr Kedar Baral, an epidemiologist, says that even though they cannot make an assumption, there are hints that point towards that.

“It’s been over a month since we imposed a lockdown, but not much has changed. Normally, cases should be going down in two weeks, but the rate at which the cases are coming down is slow and that is a cause for concern,” says Baral.  “Maybe it is about time we went to various communities and did the testing.”

Infectious diseases expert Dr Janak Koirala seconds Baral as he says that 100 infected Covid-19 patients can infect up to 2,500 people. In a country like Nepal where there hasn’t been community testing, that number can be even more.

But, as a lot of people have moved out of major cities, there is a good chance that rural areas might now turn into a hotspot which will be detrimental, says Baral.

“The numbers maybe going down, but the risk is still there,” he says.

The reason experts are issuing the warning is infections in rural areas take time to spread due to these areas being thinly populated. Add that along with lack of testing in these areas, according to doctors, is a recipe for a disaster waiting to happen.

“People only get tested if they show symptoms or after they recover. But, the number of people not testing despite the symptoms are quite high and that is why we shouldn’t go by the data provided by the government,” adds Baral.

Baral says that if the government can undertake antigen testing across the country in the coming two weeks, it can get a good picture of where the nation stood when it came to controlling Covid-19. He believes a lack of testing in rural areas and geographic difficulties of these areas are reasons why they have not been able to find a bigger picture.

“Cities aren’t any different. Lockdown is not the only solution,” says Baral. “We need to make sure we are testing communities. Only that will help us control the pandemic.”

With infections decreasing, the number of people dying to Covid-19 decreases automatically, but the risk of the virus is ever-present, adds public health expert Dr Sharad Onta. He says that people should not assume that Covid-19 is going away based on the data because the data is not 100 per cent accurate.

“We’ve hardly tested villages in remote areas. Until we test these areas, we can’t celebrate. If we do, that would be stupidity,” says Onta, wh,o like Baral, emphasises community testing in the next fortnight.

Even though doctors and health experts are positive about the decrease in cases, they still feel that government and the public should not get carried away if they want to get rid of Covid-19.

Communicable disease expert Dr Sher Bhadur Pun says that in the past week, the Shukraraj Tropical and Infectious Disease Hospital is filling up with people from rural areas. People from Ramechhap, Sindhuli and Dolaka districts, which do not have proper heath care facilities, have come to Kathmandu to seek treatment in various private hospitals.

“The people who left Kathmandu on the eve of lockdown went to their villages and infected people there. That has caused a spike in these areas, but due to a lack of testing, no one knows that they’re infected. When they do, it’s already too late,” says Onta.

Kathmandu University’s Dhulikhel Hospital in Kavre is running outreach centres in 18 rural areas across nine districts in Nepal. Almost all these centres are flooded with Covid-19 patients, says Dr Roshan Kumar Mahato from the hospital.

Having visited these rural areas recently, Mahato says he believes that the infection rate in these areas is about 50 per cent. He says that in one village, 18 out of 24 tested positive for the virus and believes that the number will increase in the following weeks.

“The local governments are not prepared to handle this,” says Mahato.

Around 10 people from rural areas are admitted to Dhulikhel Hospital every day. As most of them visit hospitals only when their heath deteriorates, the number of people dying in Dhulikhel is also quite high. Mahato says that even though they try their best, they have not been able to save people’s lives because some of these areas are incredibly remote for them to be brought to the hospital on time.

“Only way we stop this is by community testing in rural areas,” Mahato echoes Baral, Koirala and Onta.

On June 4, there were 280 positive cases across 11 districts in Karnali. Some villages which showed Covid-19 symptoms were sealed for a week. The situation is so bad that in Chhedagad municipality in Jajarkot, all health workers from a health post tested positive for Covid-19. In some areas, the infection rate for antigen tests stood at 100 per cent.

In Jajarkot, the infection rate over the past week stood at 60 per cent, says Gaura Gharti Magar, the information officer at the District Health Office. Between April 20 and June 4, 907 out of 2,110 tested positive for the virus in the district.

Only antigen tests were performed in the district during this period as it was impossible to perform PCR tests in the region which has seen three deaths since April 14. Currently, the district has over 250 Covid-19 patients.

Things are similar in Banke too. Bheri Hospital, which looks after much of the district’s Covid-19 cases, is also getting a lot of patients from rural areas of the district and neighbouring districts. The hospital’s chief consultant Dr Rajan Pandey says that cases in the city have gone down, but the hospital is getting a lot of cases from villages around Bardiya, Kailali, Dang and Surkhet.

In areas like Rukum, Dailekh, Kalikot, Humla, Mugu and Dolpa, there has been little to no testing despite people having symptoms, informs Madhav Chulagain, a public health official from Jumla. Chaulagain says that people are sceptical about getting testing even though there are enough kits in the district. The reason, he says, is people feel that they will be looked at differently in society if they test positive.

“They feel that Covid-19 is a taboo. People are falling sick, but they refuse to get tested,” he adds.

Things are similar in other parts of the country too where people are refusing to get tested.

All hope rests on vaccines

Even though Nepal is only going through the second wave of Covid-19, experts are warning that a third wave is on the horizon if people are not vigilant enough. The reason they say is their stupidity to think the danger has sailed when the virus is mutating from one country to another.

The only thing to ensure people can be safe from Covid-19 is vaccination. Doctors and public health experts have said that the government needs to vaccinate as many people as they can so that they can deal with the virus if and when the third wave comes.

“This variant is more dangerous than the earlier one, so the only way we can be prepared for the next wave is by vaccination and awareness that the vaccine works,” says Koirala.

Shukraraj Hospital’s Pun says that people have been inquiring about vaccines in the recent past which he says is a good sign. But, 90 per cent of Covid-19 patients who come to the hospital have not been vaccinated, says Pun.

“People who’ve had one shot have been doing fine, but those who haven’t are not. Vaccines work,” says Pun, who adds the government needs to do everything in its power to ensure that most of the population is vaccinated before the third wave.

Baral also gives emphasis on vaccination because he says nobody knows when the pandemic is going to end. “Vaccine will come when it comes, but for now, we need to focus on testing,” he says.