The Central Bureau of Statistics says three employees mobilised for the national population census died during the 15-day census period.

An enumerator in the Rasuwa district committed suicide in the past 15 days whereas another one fell off a cliff and died in Dhading, according to the bureau chief Nebin Lal Shrestha.

In Kailali, on the other hand, a supervisor died of a heart attack.

Shrestha says the deceaseds’ families would get insurance coverage.

The bureau had mobilised 40,000 enumerators and 8,000 supervisors for the decennial census. Begun on November 11, the count had been over on Thursday.

The bureau says it will reveal the preliminary data in the next three months. 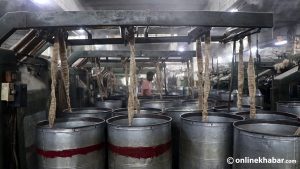 There are 60,185 industrial enterprises in Nepal: Govt survey