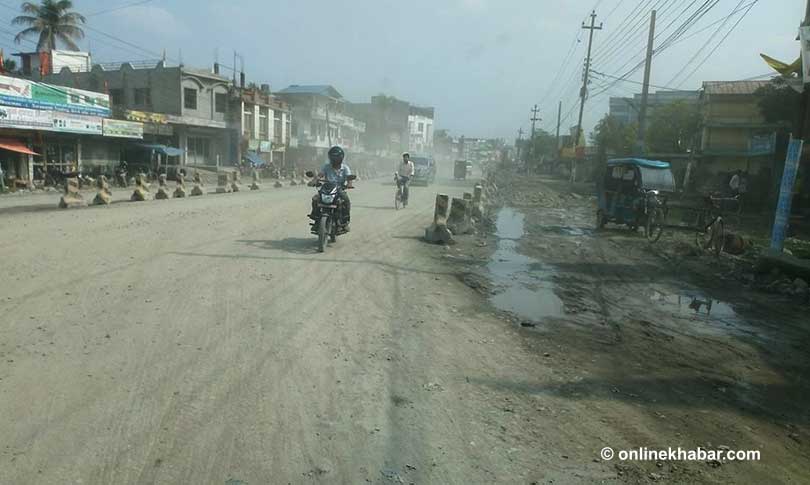 File: A road in Biratnagar

The Biratnagar metropolitan city government has asked the residents not to get out of their houses as the air quality in the city has been found ‘very unhealthy’. According to the Accu Weather, the city’s air quality index (AQI) was at 200 on Thursday.

The metropolitan city office released a statement on Thursday asking netizens not to get out of their houses unless it is absolutely necessary.

The office has asked people to stop burning waste and halt all construction work. Its has also asked people not to indulge in morning walks as it would have an adverse impact on their health.

According to government standards, an AQI of 60 is considered good. However, the AQI in the morning was over 160 and has reached up to 200 at noon. The metropolitan city officials say that it is likely to go up by the evening.

Environmentalist Ram Chandra Adhikari says while the poor AQI level would not have an immediate impact on people’s health, the long-term impacts would be dangerous.

“The rise in pollution is due to temperature drop as the dust particles in the air has nowhere to go due to pressure from the cold winds,” says Adhikari. “These particles can have a negative impact on a person’s long-term health.”

The traffic in Biratnagar, also an industrial city, is quite high. Due to that, high particles of lead, mercury and cadmium could be found in the air.

“These metals will enter the body through the respiratory system and cause cellular disorder,” says Adhikari.

In the name of infrastructure development, thousands of trees have been cut, which, experts say, has affected the city’s air quality.

Adhikari says that the air quality index in Biratnagar was quite low during the nationwide lockdown. However, the AQI started to deteriorate as life went back to normal.

The metropolitan city since July has been regularly monitoring the air quality of the city.

Earlier this week, the Kathmandu’s air quality had been recorded as the worst in the world, forcing the government to urge the public to stay alert.