One of the oldest higher education institutions in Nepal’s capital, ASCOL has a glorious history as, over the years, it has produced key science scholars in the country.

One of the oldest higher education institutions in Nepal’s capital, ASCOL has a glorious history as, over the years, it has produced key science scholars in the country. However, it is in shambles currently, and it is not certain if it will change for the better.

There were times when ASCOL used to be the best college in the country. The college has produced quality human resources in the sectors of technology and politics. But, now, the ASCOL students are looked upon the opposite way. For the last few years, the college with a proud history has been witnessing frequent padlocks, political disputes and students’ attacks on teachers.

Moreover, the infrastructure built in 1961 is in the worst condition following the 2015 earthquake. These days, rainwater seeps into the buildings and classrooms are also not sufficient for the students.

The fate of ASCOL is similar to that of the majority of government educational institutions. Wild vegetation and bushes are growing around the classrooms. There are insufficient materials for practical exercises; there are hardly 10 computers in the CSIT and BIT lab. On top of that, most of the computers have only monitors and not CPUs, making them useless for the students.

The concerned people say due to political power-sharing, all the constituent colleges of Tribhuvan University are losing their goodwill.

According to them, the office bearers appointed during the Panchayat period could work for complete tenure as there was stability. After the restoration of democracy, not only did the government change rapidly but colleges were also influenced by political power games. With the change of the government, people close to the ruling parties started getting appointments at universities and colleges.

With the onset of republicanism in Nepal in 2008, political power-sharing at constituent colleges of TU became normal. Since then, professors close to Nepali Congress are getting appointments at Tri-Chandra College and Padma Kanya College. The ones close to the CPN-UML are leading Ratna Rajya Laxmi Campus, Mahendra Ratna Campus and Patan Multiple Campus and the people of the CPN-Maoist Centre are given the jobs at ASCOL and Sano Thimi.

But, the colleges led by the people close to the Maoist party are known as the strongholds of the CPN-UML’s student union. Hence, the conflict between these two parties has badly affected the college’s regulation.

“Students associated with the UML’s student wing padlocked the college every time when somebody close to the Maoist party is appointed as an office bearer of the college,” says Ramesh Shrestha, a former student. “Such activities are affecting the prestige of the college.”

He adds that student unions are supposed to work on behalf of students and implement a policy that would benefit the students, but such a thing never happens.

“The students of ANNFSU (the UML student wing) have lifted the padlock at the office of the CSIT department head but have threatened to close it again,” says a student asking for anonymity.

“The main problem of the college is political power-sharing,” says Lok Bahadur Baral, the college head. “One party protests when the other party’s office bearer gets an appointment. They disrupt almost all the administrative work of the college, hindering the smooth administration.”

Student leaders’ involvement in financial matters of the college has also been another problem here.

“The student unions are more interested in financial matters than in education,” says one of the professors anonymously. “Rather than focusing on the improvement of the educational level and infrastructure of the college, they are interested in the money allocated for it.”

He questions, “What could be worse than this?”

“It is sad that student politics has created hurdles in the education sector,” says Laxman Dhami, a student at ASCOL. “Everyone has seen the role of student leaders.” There is no need for such unions that neglect the educational issues and padlock the college, he adds.

“Due to the pressure of the student unions, the number of available seats for the CSIT programme was increased more than its capacity,” says Rabindra Singh, the assistant college chief. Due to this, there are insufficient classes for the students.

However, an assistant campus of the college, Singh, claims that the education quality of the college is still good regardless of padlocks and other issues. “It costs only Rs 200,000 to study CSIT at our college whereas it takes over Rs 1 million at a private college. For this reason, the revival of ASCOL is necessary.”

According to him, there are good programmes at ASCOL for the master’s level also. The lab was also well-managed earlier. The process to build the library has already started, so there will also be a quality library very soon.

Rahul Adhikari, a student, says the quality of education at his college is satisfactory. He says, “The teachers are also good, but we only lack a proper studying environment and infrastructure.”

According to him, one needs to reach the classroom by clearing bushes and one has to stand to study in the class. At the same time, the librarian says that they are compelled to work risking their life.

“The water seeps in if it rains even for some moments. We are compelled to work in such a dilapidated building,” says Shiva Niraula, an assistant librarian at ASCOL.

Similarly, another assistant librarian Ramesh Niraula blames the college leadership for the worst condition of the college.

Hostel as the key issue

Meanwhile, there are over a hundred students accommodated in the ASCOL’s hostel although it is meant for only 70 students. Those students staying there even after their graduation is also creating a problem. They also tend to use excessive electricity.

Former college chief Pushpa Lal Humagain tells Onlinekhabar that he once paid an electricity bill of Rs 5.6 million. “The hostel is also another major problem of the college,” he says.

The assistant campus chief Singh says that it is very difficult to manage the hostel. “Around 90 per cent of the problems will be solved if the hostel is changed into a classroom.” 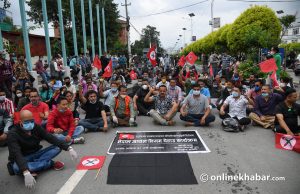 How are political student unions working for the Nepal elections 2022?