A recent video by People for Ethical Treatment of Animals (PETA) on the treatment of captive elephants at the Elephant Festival in Sauraha triggered outrage around the world. Almost all sponsors of the event intended to promote tourism withdrew after they realised what really goes on under the guise of ‘elephant tourism’. While the video shocked many people seeing this kind of cruelty for the first time, these gentle giants have been enduring excruciating pain for centuries.

On World Elephant Day, we need to remind ourselves that whether it is an elephant in the wild or in captivity, both are suffering, thanks to our activity. In the wild, we are encroaching upon their habitats. They are being killed for their ivory; they are also being killed in conflict with humans.

The elephants in captivity have their own sufferings. With the rise of mass tourism, the elephants now carry on their back a whole business model that thrives on the suffering of these animals, touted as one of the most intelligent of animals.

The sadistic process, known as ‘phajaan’, starts with the calves. The traditional Asian method of crushing the spirit of baby animals is highly practiced in Thailand. According to Carol Buckley, elephant welfare expert and the founder of Elephant Aid International, “The phajaan is a spirit breaking ‘ceremony’.  They link it to religion so they are allowed to do the treacherous deeds. It starts when the calf is forcibly separated from the mother and ties up on all for legs. The mother is removed and taken miles away. The baby is beaten when he screams in fear because he misses his mom and he is petrified. He is beaten all days for days, even weeks until he stops crying, stops fighting and breaks down emotionally and mentally. He is starved, not given water, burnt with fire, forced to remain chained. He is stabbed with knives, spears, ankuses. Beaten on the head, face, legs, spine, elbows, knees toe-nails, anywhere the mahouts can make him cry out in pain. This goes on until the calf finally crumbles to the ground and wants to die. At that point, he is broken, destroyed and already an empty shell of himself. Then the training begins, in the same manner, the breaking did, with physical abuse.”

In Nepal, where elephants work for bodies such as National Trust for Nature Conservation and private resorts and cooperatives, a process similar to phajaan is used to make these giants submit to the whims of their owners. The gentle giants, who have earned a reputation of having unfathomable memory and a vivid sense of relationship with their surroundings, are trained between 2-4 years of age. Beyond this, they simply become too big to train safely.

Training begins by detaching a calf from its mother. A few days later, food and water are restricted. The calf is tied with cotton ropes to a strong wooden pole while its neck and leg are chained so it cannot harm the trainers. Daytime training begins with the calf tied to its neck and spread out vertically so two trainers can lead it around an open area. Vocal instructions are given to the elephant to tasks like moving left, right, sit, lie down. The main mahout wears white clothing so the elephant will recognise him and allow him to sit on his neck/back.

During the evening, a fire is lit and brought close to the calf’s skin followed by massaging of the skin. This is to desensitise the elephant’s skin but at the cost of injuries. After this period of training, the calf is taken out into the village to become familiar with livestock, people, vehicles and their noises. The mahout continues to work with the elephant so that it understands vocal instructions. This whole period lasts about 20-30 days. After the training is complete, rituals are performed for the gods and goddess.

I had a conversation with one of the owners when I found out that his calf was ready for training. It was difficult for me to understand his take on it. He was convinced that he loved his elephants, they were his ‘investment’. The term ‘investment’ was troubling. It was as if elephants were commodities. In spite of promises to train him humanely, the calf wasn’t spared.

The mother was devastated and her cries of anger and helplessness could be heard from afar. As the elephants are subject to relentless physical and mental torture, the impact on them is not temporary. Elephants, just like humans, suffer from post-traumatic disorder, and this leads to lifelong negative effects. Therefore, it is not surprising when mahouts are killed by elephants, tourists hurt and properties damaged.

At a recent workshop on human-elephant conflict issues, I asked a government official why there was no intervention on this topic. His answer did not convince me. The most frustrating thing in this whole paradigm of the human-elephant relationship of master and slave, owner and investment, profit and marginalisation is that it will continue as long as the public goes to Sauraha for elephant rides.

Not meant to carry load

The back of an elephant is not meant for heavy load. Their sensitive backs can even feel a butterfly landing on them. Due to their massive size, their body weight is supported by their legs and when the howdah weighing 30-40 kgs is loaded on their vulnerable backs, it causes major bone and muscle depletion. Majority of the elephants used for rides have tuberculosis, are malnourished, have scars inflicted by hooks and many are blind or suffer from arthritis.

In the wild, elephants live in a huge family led by a matriarch. They are emotionally and socially attached to one another and travel for miles in search of food. They can smell the water and through their feet, they can actually hear and navigate towards water sources. They graze, pick leaves, bathe in the mud and play in the puddle and when they excrete, the seeds in their dung creates forests. They give space for the ecosystem to flourish, That’s why they are a keystone species.

In captivity, these elephants are chained even when they are not working. They are led by a mahout on a strict path, beaten if they attempt to stray. They are not allowed to graze or eat their natural food, they are fed kuchi, an underwhelming bulk of hay and barley with very less nutritional value, instead.

While the Nepal Tourism Board, Ministry of Forestry and Soil conservation, Department of Forest, Department of National Parks and Wildlife Conservation and countless organisations keep mum about the atrocity, the government as a whole also has turned a deaf ear to the way these elephants are brought to Nepal. Recent reports on smuggling of elephants from India, mainly from Assam, have sparked a conversation on the issue, but that the biggest land animal on earth can be smuggled across borders without anyone noticing highlights the incompetence of respective entities.

Countless measures to tackle this dire problem have been proposed and tried. However, the only solution for these captive elephants is to initiate a sanctuary model. All over the world, sanctuaries are being introduced where animals roam free from chains and abuse while they are observed from outside. These models ensure that the elephants are not subjected to cruelty. Until the business owners, resorts and cooperatives use elephants for one-way profit and ignore basic welfare of these enslaved workers, widen their tunnel vision, their own future, along with the future of the elephant tourism, looks uncertain. The world is waking up to the plight of these captive elephants and more people are choosing ethical tourism.

Elephant tourism is a colossal venture with private and cooperative-based businesses expecting to yield the utmost profit from it, and the government seeking to gain maximum benefit for research and anti-wildlife poaching endeavours. However, the humility of these gentle giants is not a licence to torture and abuse them.

Until the government collaborates with elephant owners along with animal welfare activists to implement the sanctuary-based model, the glory of elephant tourism as shown in exaggerated videos will not bring in tourists anymore.

Shrestha is an animal rights activist. 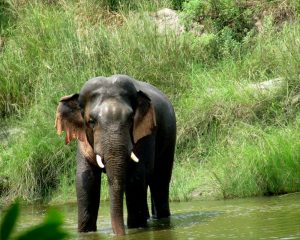