Have you ever given a thought to what your poop could reveal about yourself? It might uncover things beyond your imagination. It is not just true for humans but also for the largest land-dwelling animals.

Did you look at your poop today? Was it nut-like (hard and difficult)? Was it sausage-shaped (big and lumpy)? Did it have cracks in the middle, or was it swish and easy? For the lucky ones who get it nice and smooth, pooping is one of the best and the most satisfying feelings. For the others, it is not as easy. The other thing when we notice about poop is its colour and texture. It depends on a handful of things: diet and the amount of bile in it. Bile is a yellow-green fluid that helps digest fats. A healthy body waste should reflect a mixture of all the colours of the food you eat, and bile. Close to any shade of brown, yellow, or even green is considered okay.

Nearly every ancient human culture has been known to have practised coprology (also known as scatology). It is the study of faecal materials. Some cultures even used to believe that the shape, size and texture of one’s poop could be used to predict one’s future. The term “gut feeling” has definitely got something to tell us. Our gut, which is also called our second brain, has significant literature related to our psychology. Nick Haslam, a psychology professor at the University of Melbourne, argues that psychologists should stop averting their eyes from the bathroom. Researchers have come up with a remarkable assortment of phenomena related to the excretion, including several psychopathologies, personality traits, sexual aberrations, emotions, prejudices and linguistic practices.

Biologists have borrowed this ancient technique of coprology to assess the potential medium for inter-sexual chemical signalling and the level of stress. Such studies also aid humans in understanding why elephants behave the way they do.

Poop plays a vital role in chemical signalling for elephants. In other words, elephants communicate with each other using poop. Male elephants are signalled about the sexual receptivity of a female elephant by the scent of her poop. A study found that the males demonstrated a preference for the females’ poop in their pre-ovulatory period (the period where the female is fertile), in contrast to the poop of those in their post-ovulatory or non-ovulatory stage (when the females are not-fertile). This was true for repeated experiments for most of the elephants. It means that an elephant’s poop can play an essential role in their mating behaviour, hence their survival.

Along with chemical signalling, the stress level is another part of the information that can be inferred from an elephant’s poop. When an elephant encounters a stressful situation, a part of its brain (called the hypothalamus) sends a message to its pituitary gland, which stimulates its adrenal cortex to secrete the glucocorticoid hormone (a process interestingly similar to humans, though we do not have the super-olfactory sense to communicate through our poop). A greater secretion of glucocorticoid hormone leads to a greater level of faecal glucocorticoid metabolites (fGCM) in the elephant’s poo. Some biologists, like Sanjeeta Sharma Pokharel, have used fGCM monitoring (a non-invasive technique) to assess the level of stress in elephants.

But, why assess an elephant’s level of stress in the first place? For one thing, the prolonged secretion of the hormone adversely affects an elephant’s immunity, cognitive abilities, and reproductive health. Anyone who has felt stressed out (perhaps before an exam) can relate to this. All of these threaten the survival of individual elephants as well as that of the elephant herd. Apart from the generous desire to protect the immunity, cognitive and reproductive abilities, and ultimately, the survival of elephants, there is one more reason to ensure that our elephants live in a stress-free environment.

Dr Pokharel states the more stressed the elephants get, the higher the chances of an adverse human-elephant interaction (popularly known as human-elephant conflict). This has had shreds of evidence in different places. For example, in the Mekong River in China, the dams made for the Jinghong Hydropower Station in 2003 created a stressful environment for the elephants, impeding their habitat and yearly migration. As a result of the prolonged stress, 18 elephants in that area turned violent, causing 77 human deaths and a loss of USD 3 million in food crops within nine years.

We may encounter a similar situation in our country too. The proposed project site for the Nijgadh International Airport obstructs the migratory routes of the beautiful Asiatic elephants. It is enough in itself to stress the elephant. The subsequent air, water and noise pollution would probably not alleviate the stress in any way. Judging by the previous instances, it is safe to assume that the stressed-out giants would get angry at any interference, or perhaps even crash themselves in the airport itself. As our northern neighbours did, it certainly will not be wise to build an expensive infrastructure as a call for a tussle between humans and elephants.

Since you made an effort to read it all, as a bonus, we wanted to provide you more conversation starter information: it looks like it takes the same amount of time for both you and an elephant to produce poop.

Poop Appearance: What Stool Shape, Size, & Smell Can Tell You 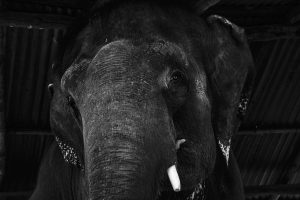