Wedding photography in Nepal has skyrocketed as a business. Fotopasal is an example Going back to a decade ago, wedding photography in Nepal was not anything like it is today. Weddings were usually captured by either a local photographer from a local photo studio or by some friends having cameras.

Manoj Shrestha, the executive director and senior cinematographer at Fotopasal, says, “Fotopasal was not a planned effort. Sampurna dai used to cover some weddings on his own, and this is how it started. Soon, his friend Buddha Singh Maharjan, who used to do model photoshoots in a magazine, joined him.”

Shrestha says the duo aimed to take wedding photography to the next level.

“Sampurna dai used to share his experience on covering weddings. He told that photographers were not treated with respect in the wedding.”

With an aim to change that and standardise the level of wedding photography, the duo named their company and marketed it, creating a Facebook page in 2013.

“Everybody considered this as a bad business move back then,” expresses Shrestha. But, the demand gradually grew and Jeena Rajkarnikar joined the team to look after editing. Over the years,  the team gradually acquired the market of wedding photography in Nepal.

In 2014, Manoj Shrestha joined the team and introduced plans for making promos, short videos, and music videos too for weddings. “It was only after that we properly started the official journey of Fotopasal by setting up our office,” he says, “It has been around nine years since then. Before that, we used to meet the clients outside either in a restaurant or other places. We used to outsource videographers, but we have a staff team today.”

Manandhar and Shrestha worked together for an ISP for four years. “While working there, I and Sampurna dai bought cameras, after which we used to go out at night and click pictures. We used to always carry our camera while coming to the office. And, it became a daily routine.”

Then, one of their colleagues offered both a job to cover his friend’s wedding and reception. And, they jointly did it, receiving Rs 8,000 as rumeneration. But, nearly a decade down the line, the company charges Rs 60,000 to Rs 100,000 for an event.

“After that friend’s assignment, I became busy in my job and could not continue photography. However, I used to sporadically do videography as a hobby,” Shrestha shares, “But, Sampurna dai continued wedding photography.”

One day, when Shrestha showed some of his works, Manandhar asked if they could make similar short videos of the wedding events too. “The first wedding video we made was for a well-off family, and we got very good feedback,” says Shrestha.

“In the beginning, we faced some difficulty making people understand this concept (of making extra videos), especially the older generations. They were not satisfied with photoshoots and especially short wedding videos, and they used to complain that it was too short.”

To make people understand their vision of standardised wedding photography, they used to show them sample pictures of promotional photoshoots they did earlier. Gradually, this problem disappeared, according to Shrestha.

Fotopasal initially did not have the capacity to cover more than one event in a day. After Buddha joined the team, Fotopasal scaled up enough to do two weddings in a day and as of now, it can do six to eight weddings a day.

“We had no idea that Fotopasal would reach this height when we started this. We credit the word of mouth from our clients for this immense growth,” expresses Shrestha.

He remembers when they wanted to upscale their company, they approached some good photographers, but they refused to do so as they were doubtful about its sustainability. But, the same photographers are in the wedding photography business today.

“Sampurna dai was working at two other places and wedding photography was his hobby only initially. After the business grew enough to assure him the security,  he left the other two jobs,” Shrestha narrates, “He started with limited resources that included a camera, two lenses, flash and speed light, but great passion and vision.”

Fotopasal has catered their services extensively not only in Kathmandu but also in Chitwan, Pokhara and Biratnagar. “We are the same four people in the core team of Fotopasal till date. But, currently, Sampurna and Jeena are in the USA, and they are handling Fotopasal outlets in the USA for the past seven years. Plus, we have 19 staff which includes five photographers, four videographers and editors and a front desk officer.”

Fotopasal is soon planning to establish another outlet in Australia to cater to needs of Nepalis living there. 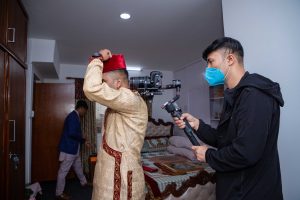