The Nepali music scene has thousands of rock songs. Each Nepali rock song has its own flavour and speciality.

While there are thousands of hit rock songs, there are also many rock songs that are least heard despite being worth listening to.

This week, Onlinekhabar has listed a set of rock songs that are less popular yet deserve your attention.

Yoddha is a Nepali rock song by the Atharva band. Though the song holds great potential to be popular, it has remained underrated. The song talks about a warrior. Along with the powerful lyrics, the thing that has made the song more rocking is its guitar solos, played by Anuj Man Shakya. Interestingly, this rock song also consists of classical music fusion in the middle where tabala has been used.

Ekchhin Baraalida is another most underrated Nepali rock song by Rory and Friends. The song is a part of the album with the band’s name. This song has a humble beginning that features a flute and a soft guitar melody. But later, the song goes to another level featuring power chords and high notes.

The rock band Cobweb has a lot of popular songs, but they also have underrated songs and Pratibimba is one of them. Along with its composition, the lyrics written by Prajwal Kattel and Ritavrat Joshi are equally powerful. This Nepali rock song talks about existence, consciousness and crisis. The song is from the album Astitwa.

It is a soft Nepali rock song from the Mantra band’s debut album, Mantra, released in 2003. The song features lofty verses to attract and impress loved ones. The song is also well remembered for the acoustic guitar played amid the song.

Huri Bahadur is a Nepali rock song by the band Chawrko. The song, despite being worth listening to, has only around 2,000 views. Huri Bahadur is about a lunatic driver who hits people with his vehicle.

Released in 2019, Rasaayan is a rock song by Kagaaz. The nearly three-minute-long song is so loud and powerful that it would definitely make your head bang in its tune.

Harey Ram Harey Krishna is another Nepali rock song, which is underrated. The song by 11:30 Basan was released in 2015 as a part of the album, Sunaudai Chhaun. It has very captivating guitar solos and riffs.

Kina by the US-based Nepali band Near Mirror was released in April 2022.

According to the band, “The song is about how one instantly acquires the comfort and agony in life since its birth and how one fashion its life entirely is contingent on one’s struggles.”

If you are wanting to listen to a rock song with powerful lyrics and music, Agyani by Pahenlo Batti Muni can be a perfect choice for you. The band is mostly known for their songs Lori, Gauthali, Bari Lai and a few others, but Agyani is also equally good as those popular numbers. Agyani was released in 2019 from the band’s debut album Asthir.

Jeu Ko Masu is a Nepali rock song by Mt 8848. Along with the song, the music video of the song is also equally interesting as it features ascetics dancing and playing the guitar. The song consists of variations from soft vocals at the beginning, a powerful riff and a melodious guitar solo. The song also represents the album with the same title. 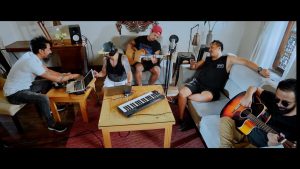