Two people were killed when a truck hit a motorcycle at Gabhar along the East-West highway in Banke district on Monday morning.

The truck (Na 6 Kha 6799) was heading towards Kohalpur when it knocked down the motorcycle (Lu 6 Pa 1822). The Kohalpur area police office stated that the accident took place around 8 am at Rapti Sonari rural municipality.

Chetan Bohora and Pradip Chaudary of Bansgadhi, Bardiya, who were on the bike, breathed their last at Kohalpur Teaching Hospital, where they were taken after the accident.

Police have arrested the driver and impounded the truck as they investigate the accident. 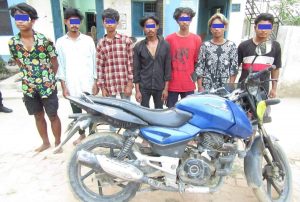