Don’t ever think that a movie with a clown as the hero is always a comedy. This week’s Kollywood release ‘Selfie King’ is the exact opposite (though, surprisingly, the cinemas in Kathmandu are promoting it as a ‘comedy’). Selfie King, precisely, is a tragedy–about a comedian’s life.

Presenting acclaimed Bipin Karki as the title character, debuting director Bishal Sapkota has done a commendable job in filming the emotional story that he wrote. Though the way the movie unfolds is full of flaws, the project, besides entertaining the audience, makes them contemplate what it means to be a ‘celebrity’.

Our hero is a comedian who hosts a popular television show. He is known across the country–as the Selfie King, who is ever ready to crack jokes and make the audience laugh. If the movie had been about his public life, it could have been considered a comedy. But it is all about his personal and family life, which essentially is tragic. Hence, some spectators might find this movie ‘deceiving’–it promises you a comedy, but delivers something else.

Like the classical tragedies, this movie ends in loss and despair. The first scene shows you a happy family–an ageing couple watches their ‘celebrity’ son on the television show. Despite the father’s complaints about the celebrity’s earning, the mother is proud of him. Moreover, she is hopeful that the son can address the father’s complaints also.

As the story moves, the dad’s complaints thicken and the mom’s hopes fade. In the end, the ‘intermediate’ hero realises that his own hamartia (tragic flaw) has led him to the downfall. Readers of Sophocles are prone to likening the weeping Selfie King of the final scene to the self-blinding Oedipus Rex of the super-celebrated Greek tragedy.

The burden of fame

But, ironically, the audience is generally unknown about the personal life of a celebrity–even though they are fans of him/her. The movie, hence, attempts to expose this irony. From the beginning to the end, Selfie King is all about the comedian’s way of dealing with real-life situations.

In doing so, our hero is not successful in living a life that he wanted. He finds himself lingering with the burden of fame. On the one hand, he fails to meet the expectations of his family members; on the other, he is compelled to present himself as a celebrity in the public sphere. He finds himself trapped between the real and the fake. It forces him to hide from both situations.

This is apparent in his mismatching behaviours. He visits a hospital and a funeral ghat as a clown, in heavy make-up and funny clothes. But, whenever he is in the public space such as roads and eateries, he is masked because our hero fears attention though he loves popularity. Psychologically, these two seemingly contrasting scenes mean the same: he does not want to, or cannot, live the life that he is supposed to live. He is a coward, crushed by the tension between private and public expectations.

But, the public rarely thinks that the celebrity’s life is filled with desperate efforts of making and faking impressions, which may not always match real life. The movie blatantly exposes it–when his fans laugh in his ‘real’ cry. The scene, being the crux of the plot, tells a lot about the price of fandom.

Given the vigour of psychologically charged story, the first half of the movie looks bleak. Cheap tools for catching the average audience’s attention get priority there: the hero’s excessive love of alcohol leading him to several arguments, his extramarital affair, and his lame efforts to lie to the interrogating wife. Also, there are a few semi-vulgar words; there is one scene during which the hero shows his private organ to another man (though it is hidden from the camera). As the movie opens, you feel that you are watching another comedy like Chauka Dau and Garud Puran, two of the worst movies of the last year.

There are technical flaws too. Why is the scene that shows the back of the hero’s jacket repeated many times? Why is the scene involving four people–the hero, another comedian, the singer and the local event organiser–longer than five minutes? Moreover, why is the camera angle static here?

A few incidents are unrealistic. The decisive scene in which the dad falls unconscious while watching TV is essentially dramatic: he laughs so loudly and for a long time, in contrast to his own opinion about the TV show, ultimately his nose bleeds and he blacks out. Likewise, the way that the wife, in the hospital, asks the hero about his whereabouts the previous night cannot be relatable to real life.

The flaws are not limited to the first half, and to the presentation. The story itself has several holes. Throughout the movie, you do not understand why people force the Selfie King to do something that he does not like. For example, the event manager in Salleri once literally pushes him onto the stage. The way the ‘King’ is treated does not match the impression that he has left in his audience. Unlike other performers, he is deprived of an air ticket to go to Salleri. The owner of a roadside eatery, who claims that his family members are fans of the Selfie King, first irritates him by giving a torn banknote in change and engages in a short quibble after that. Even the hotel staff do not give him a mobile adapter. Consequently, the central theme of the movie, ordeals of the stardom, looks more forced than smooth and natural.

Nevertheless, the movie keeps you hooked because it does not deviate from its purpose and theme.

Then there are efficient actors who are capable of compensating the oversights. Bipin Karki is on a par with the audience’s expectations from him. His female companion in the movie, Laxmi Bardewa, also does not disappoint you. But, the story itself limits her role in a few scenes only. Otherwise, Bardewa could have advanced herself from her promising competence in Bulbul. Abhay Baral catches everyone’s attention; he looks natural and spontaneous. Baral deserves more important roles in the next productions. Sabin Bastola gets shorter screen time, but he makes the first half lively with his joke-like but real-life anecdotes. Jiban Bhattarai also leaves an impression on the audience. Lokmani Sapkota and Bhuwan Chand are okay.

Selfie King’s strength is its story, not the making. It is a ruthless revelation of the tragedy of a comedian’s life. The young director needs to improve his presentation skills to quench the Nepali audience’s thirst for ‘good movies’. 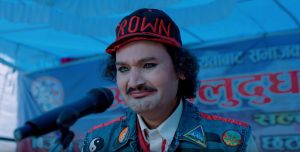 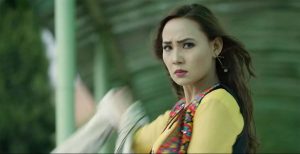