Remeasuring Everest: How far is the ‘new’ height announcement?

On May 22, officials from the Survey Department summited Everest and, in doing so, completed the most complex part the Everest Measurement Programme. Many at the time had felt that with that people would now know the exact height of the highest mountain in the world; however, that was not the case.

According to Susheel Dangol Chief Survey Officer and Coordinator of the Mount Everest Height Measurement Programme, the expedition to Everest represented only 20 per cent of the work needed to remeasure the height of the mountain, which is believed to have been altered by the 2015 earthquake. “Many people thought that climbing Everest meant that measurement was complete but that was only a fraction of the work.”

He said that the survey department was using both conventional surveying techniques similar to those used by George Everest (who surveyed Mount Everest in the 19th century) and a modern geoid system to measure its height. “We’re using trigonometry system along with precise levelling, gravity survey and GNSS system. We are using both traditional and modern methods to ensure there are no controversies,” he adds.

The trigonometry and precise levelling method

Under the trigonometry method, the department selected 12 points such as Laure Danda, Mayam, Patle Danda, Chhulyamu, Sollung, Namche, Kala Patthar, from where Everest could be observed. They used simple maths to measure the height of the mountain using the Pythagorean theorem. This was also the same system that the Indians used to measure the height of Everest in the late 2000s. Observations have already been recorded from all 12 points, says Dangol.

Under precise levelling, the department then aimed to calculate the altitude of each of the 12 points with respect to the sea-level. As Nepal does not have a sea, officials had to rely on similar measurements carried out by India surveyors to measure the altitude of the Jayanagar point near the border with Nepal. This was possible as Indian officials had already carried out precise levelling for the Jayanagar point with respect to the closest sea in India.

“This added verification was needed because we wanted to verify that the points on which we would carry out the trigonometric calculations had not changed because of the quake. This method is quite accurate but it is time-consuming. We can only measure 25 metres at a time and that had to be done from the Jayanagar in India to Phaplu in Solukhumbu.” The department took nearly six months to reach Phaplu from Jayanagar. The process is now complete.

The Gravity Survey and GNSS method is a far more rigorous and accurate way of measuring the height of a landmark with respect to the sea-level. Experts from New Zealand suggested that the department implement this method. “The two methods were used by the Chinese when they measured Everest from their side. As we were also told to do a geoid survey, we had to use both Gravity Survey and GNSS method. This will help us get the exact height of Everest from sea level.”

For that, the department set up 297 points across a 100 km radius around 12 districts in the Solukhumbu area.

A Gravity Survey is an indirect (surface) means of calculating the density property of subsurface materials. The higher the gravity values, the denser the rock beneath.

“We set up around 297 points to do this survey. Frist, we started in the high Himalayas and then the rest of the places. As we only had one gravimeter this took time.”

The basic concept behind GNSS survey is to investigate variation (gravity anomalies) in the Earth’s gravitational field generated by differences of density between subsurface rocks. “Geoid in layman’s term is the shape that the ocean surface would take under the influence of the gravity and rotation of the earth alone if other influences such as winds and tides were absent.”

He said it will be calculated after collection of gravity data obtained from GNSS and gravity survey.

Dangol adds that the GNSS survey has been completed for all 297 points. However, gravity survey for some of those points is yet to be carried out as the department only has one gravimeter.

“For the gravity survey, we need to visit each and every site and take a reading. We’ve done the gravity survey of 119 points and will soon begin work on the remaining 178 points after the monsoon.” Dangol added that they could not go to these point as most of them were located on hills where the roads are inaccessible during the rainy season.

“Taking the helicopter sounds easy but it is full of risks. You need to make sure that everything is right or else things can go really bad.”

The best thing to come out of this project, Dangol says, is that officials working at the survey department learned a lot of new things. “Yes we are measuring Everest, but there is more to this project than that. We’ve set up around 300 points in various parts of the region which will be beneficial in the long run. These points can be used for other surveys for making roads or planning any other projects in the area.”

Dangol says that the project has also improved the officials’ capacity. “This is something that needs to be done all over Nepal. The training we’ve received during this project has been immense. We had no idea about so many things, take the gravity and the GNSS surveys for example. But after this project is done, I believe that we can do replicate this surveys anywhere in Nepal.” The team also learnt about how temperature and humidity affect measurement.

Now the survey department is sending most of the members of the team working on the measurement to Denmark to learn how to calculate geoids. “Until now all the geoid work done in Nepal was by foreigners. Now it will be done by Nepalis.”

The project officially kicked off at the beginning of 2018 is likely to end in December of 2019. Dangol shares that it will take around two months to map out the 178 remaining points after which they will be able to calculate the height of the mountain. Then the department will have the data to announce the ‘new’ height of the mountain. 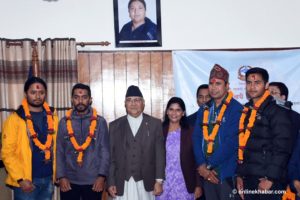