Ranju Darshana, a popular leader of the Bibeksheel Sajha Party, which is on the verge of a split of late thanks to ideological differences between two factions of the party, has announced she left the party on Thursday.

Darshana, who came to the limelight by fighting for the Kathmandu metropolitan city mayor during the 2017 local elections in her early 20s, says she will be an independent conscious citizen from now onwards.

In her resignation submitted to the party chairman Rabindra Mishra, she has accused the leadership of excessive hypocrisy in the name of alternative politics.

Darshana was close to the party leader Milan Pandey, who has been removed from the party’s majority recently.

With Pandey’s removal, it is highly likely that he will form a new political party. However, Darshana has not clarified whether she will be a part of it. 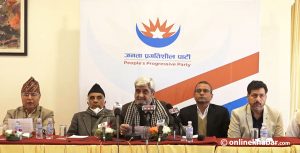