The Film Journalists Association Nepal conferred the award on Subedi amid a special function today.

The Federation of Nepali Journalists President Mahendra Bista and senior artist Haribansha Acharya handed over the award to Subedi. The journalist has bagged a purse of Rs 21,000 along with the trophy.

“I feel I have received the result of my 12-year-long hard work,” Subedi said after receiving the award, “The recognition has also added my responsibilities in the film journalism sector.” 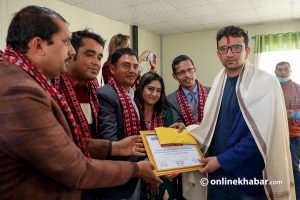