The folk-rock band Nepathya have never failed to amaze the audience with their songs. One of the oldest bands in Nepal, the band have been a blessing to every Nepali music lover.

They have been entertaining for more than three decades and are still unstoppable. Their songs are beautiful and inspiring. Hence, it has been a great challenge to pick up their best songs while creating this list. However, we have tried our best.

Here are the 10 best songs of Nepathya that should be on your playlist.

Resham is an all-time hit number of Nepathya. Probably there would not be anyone else who has not heard this song. The song was released in 2001 as a part of an album of the same name. The lyrics compilation and melody collection of the song are done by Durga Bahadur Thapa and Laxmi Joshi respectively.

Filmed at Bhaktapur Durbar Square, the music video of Taal Ko Pani features the live concert of Nepathya. Taal Ko Pani has been a mandatory song in family gatherings of Nepalis living in different parts of the world. The song is from the band’s sixth album Bhedako Oon Jasto, released in 2003.

Bhedako Oon Jasto is a part of the album Bhedako Oon Jasto.  According to the band, the song originated in the northern belt of the central hills of Nepal. The melody of the song was composed by journalist and author Narayan Wagle in Chandanbari while he was trekking in the area in 1995.

Sa Karnali is based on a folk melody (bhaka) that originated from the mid-hill area of Karnali, mainly around the Dolpa district. This song is a fusion of deuda and jhyaure rhythms practised in the Dolpa district of western Nepal.

Sa Karnali is also very well known for its music video. The music video of the song directed by Kiran Krishna Shrestha features Thinle Lhondup, an actor in the Oscar-nominated movie, Caravan.

Aaganai Bhari is the first recorded song of Nepathya and it is also the first track of their first album Nepathya released on April 1, 1993. But, the band released the song’s music video only in 2017.

Jogale Huncha Bheta is from the band’s latest album Aina Jhyal released in 2010. According to the maker of the song, the song is popular in the Manakamana area of the Gorkha district. It speaks about love and life.

Yo Jindagani is a motivational song that describes the different shades of life. Its music video features Nepathya’s concert that ran under the theme, Nepathya for the Disabled, at the Khagendra New Life Centre in Jorpati, Kathmandu.

The concert was specially organised for the differently-abled audience on October 12, 2004, to raise awareness and in support of the Spinal Injury Rehabilitation Centre.

Siran Ma Photo Chha from the band’s latest album Aina Jhyal is based on Tamang Selo rhythm. It depicts the story of people separated from family and friends due to the labour migration culture.

The composition and lyrics of this song are based on a melody from the Langtang region, the same place where the band’s classic hit Bhedako Oon Jasto also originated.

The 24-minute-long song Ghatana came out of painful contemplation of the 2004 Mainapokhari incident in which a public bus heading to Kathmandu from Jiri was caught in the crossfire of army troops and Maoist guerillas. Within a quarter of an hour,  the incident took the life of eight innocent Nepali people. The army and the Maoists both suffered in the incident.

Mero Hajur, a love song, is also a part of the band’s latest album Aina Jhyal. The frontman of the band, Amrit Gurung, wrote and composed this song during a freezing cold December night in Lobuse while trekking in the Everest region. 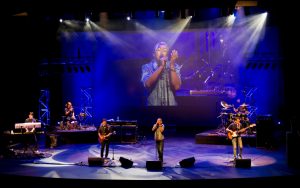