Nepal’s Koshi Basin: Water, water everywhere, but how much to drink?

As we move down the Sunkoshi River along the newly built Sindhuli Bardibas highway that links the Himalayas with the Terai plains, we reach villages in the south-eastern parts of Nepal. The people are suffering a severe water crisis. Trapped between the lofty mountains and roaring rivers, most of the villages in this part of the Koshi basin have very limited water available for drinking or for irrigation. In this region, rivers are of very little use as they flow through deep valleys with the snow-capped mountains far above.

Nepal is ranked among the world’s most water rich countries, with over 6,000 rivers containing about 225 billion cubic metres of water. However, much of this is out of reach. Nepal’s per capita water availability is 8,000 cubic metres by the government’s calculation, but less than 7% of the country’s water has been used. “We don’t have enough infrastructure to regulate water flow and direct it to the places where it is needed,” said Madhav Belbase, Joint Secretary at the Ministry of Irrigation in Nepal.

“A couple of decades ago we used to have winter paddy cultivation because there was adequate water in April. Now we don’t have water to grow maize,” said Bhakta Bahadur Shrestha from Bhimeshwor village in Sindhuli district. Taps in the village were dry, fields were cracked and maize plants were desperately waiting for water.

The village relies on a river called Andheri Khola for irrigation. This is a small tributary of the Sunkoshi River, but due to prolonged drought earlier this year, the water flow has drastically reduced, resulting in conflict between villagers. 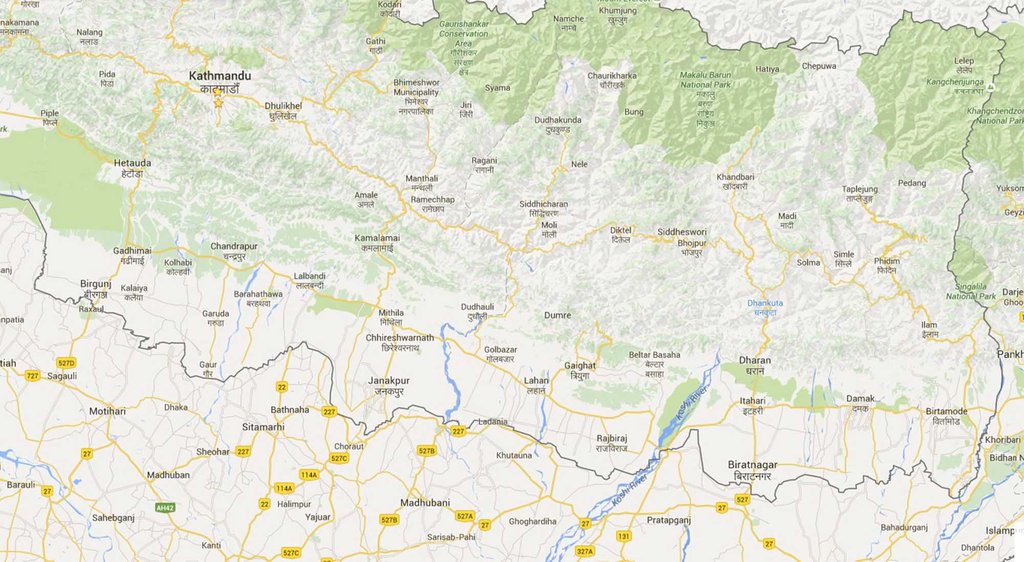 This map shows the total number of household by district and the percentage of household with access to drinking water. Data: ICIMOD

“Fights, often just verbal quarrels, but sometimes even physical fights, have become common as water scarcity has deepened,” said Nanda Raj Thapa, a farmer in Bhimeshwor. This is not the first time this has happened. “The water crisis is growing year by year. It’s been almost eight months and not a single drop of water has fallen from the sky this year,” he said in May.

Up in another village called Ghokshila, a few hours walk northeast of the highway, many villagers have migrated to cities or other places due to lack of water. One of the villagers informed thethirdpole.net that a decade ago there were 90 households in the village, but now only 35 remain. Former joint secretary at the Ministry of Forests and Soil Conservation Jagdish Chandra Baral, who is from the village, said, “Migration specifically due to water stress has increased and Ghokshila is one of the many examples where you can witness that.”

Sindhuli is not the only district facing a severe water crisis. Further east, villages in Udayapur district are facing the same problem. Bhagwati Magar in Betani village has employed someone to carry water for her small hotel named Mahabharat. “We collect rainwater during monsoon which is enough for a few months but the rest of the year we have to rely on a small spring about a kilometre away. This is the only source of drinking water for about 18 houses.”

As we went to the spring we found some children collecting water from a spout that was almost dry. Thirteen-year-old Samir Magar is working in Mahabharat hotel as a water porter. “I don’t go to school as my parents can’t afford it. So I work in a hotel and carry water the whole day,” he said. He is paid USD 30 a month.

Water resources expert Dipak Gyawali says the current problem is the result of politicians’ self-delusion that Nepal is rich in water resources and there is no need to conserve water. “Too much focus has been on hydropower when it comes to water, for decades the state turned a deaf ear towards conserving springs that are the only source of drinking water in most of the villages in the hills of Nepal,” said Gyawali, who has been the country’s Minister of Water Resources. “Our leaders have [convinced] themselves that we are rich in water. We aren’t. For eight months a year we have droughts; for the remaining four months we have too much water that floods the country. We need a strategy to hold water if we want to be rich.”

(This article was first published on Thethirdpole.net)

Tracing the mighty Koshi’s origins: Hazards in the high mountains