File: Members of the Nepal’s national team during a practice

The All Nepal Football Association has announced a 23-member team for the Three Nations Cup involving Bangladesh and Kyrgyzstan that is taking place at the Dasharath Stadium in Kathmandu.

Coach Maharjan has axed 10 players from those currently training in the national camp, according to the ANFA.

Goalkeeper duo Bishal Shrestha and Bishal Sunuwar, defenders Palsang Lama, Suraj BK and Bikash Khawas, midfielders Hemanta Thapa Magar and Santosh Tamang and forwards Ashish Lama, George Prince Karki and Nawayug Shrestha have been left out from the national team squad. The players will now be released from the camp.

Nepal will play Kyrgyzstan in its first match of the tournament on Thursday before taking on Bangladesh on Saturday.

Bangladesh had defeated Kyrgyzstan 1-0 in the opening match of the tournament on Tuesday. 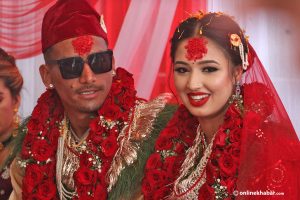