Two braids for girls and short hair for boys is a must in many Nepali schools. Photo: Pixabay

What happens when a teacher tells a student that she should not worry about her studies?

I distinctly remember that day when my teacher told me and my friends so. “Girls, you don’t have to worry… because you are being raised by your father now, and later your husband will earn you a living. And, boys from within Kathmandu, you also don’t have to study hard because you can easily make money from your parental property. But, for boys outside the valley, you must study hard to get the best job and make a living for you, your family and your wife in future.”

It was a tip from the veteran teacher, who had about 40 years of experience in teaching, to the final-year school students.

Everyone laughed, but I could not. I felt it was unfair as I, a teenage girl then, was always a top sorcerer in his subject. Moreover, his words hurt my ambition of being independent.

I was furious yet silent. Since childhood, we were taught a ‘gyani’ (learned) person is someone who folds hands and stays silent. If one raises questions, they are ill-mannered.

So, as a “good girl”, I stayed quiet, which I now regret. If I had questioned his thought, it would have impacted not all, but some of my classmates, who then agreed with his tip that promoted gender stereotypes.

This was just the tip of the iceberg, my school days were full of such sexist encounters.

But, this is not only the story of yesteryears. Still today, there are long lists of dos and don’ts that promoted traditional gender stereotypes. The disciplinary rules are not the same for boys and girls, except for a few exceptions. These rules perpetuate the gender roles defined by patriarchy to the students, and the impacts remain deeply rooted in their minds, aggravating gender discrimination in society and nurturing patriarchy.

Nabina Shrestha (name changed),  as a kid, was okay wearing a skirt as her school uniform. But, one day when her Muslim classmate came to school wearing pants, she realised she could also wear pants.

Then, the ninth-grader asked the school administration if she could switch to pants and was vehemently denied. “If I was given the option of wearing pants, I would have worn it,” the woman remembers over a decade old incident today, “The cold used to be unbearable while wearing skirts. Also, the boys would tease us with the reference to our skirts and that was a different level of torture.”

Gender activist Sanjog Thakuri, who is interested in promoting men’s role in abolishing gender stereotypes, says different dress codes for boys and girls in schools also restrict girls from participating in competitive sports. “They say they allow all genders to participate in every extra curriculum activity including sports, but they don’t make the favourable circumstances for that.”

School is one of the major agents of the socialisation process, after the family. Hence, schools along with other agents such as family, media and others in patriarchal society help ingrain gender stereotypes in children, view stakeholders. Moreover, Sanjog Thakuri says the behaviours of teachers are more impactful as pre-school kids and early schoolkids tend to believe more in them than parents. The impact is equally deep in their teens also as they spend more time with school and their friends, as per Thakuri.

Sociologist Raut explains girls and boys are praised and criticised differently in schools. For example, boys are criticised in such a way they can become constructive while girls are made feel weaker, she says, highlighting the impact of gender stereotypes is harsher on girls than on boys.

“All this create images in a child’s brain that how a girl and a boy should act and how they should be physically and mentally, what they should speak, and wear in school and in society,” states Raut.

In most cases, the ones who are in charge of imposing rules are mostly male teachers. This indirectly makes the students, especially male students, think that those who shout or punish or beat students are powerful and such toxic masculinity gets into their young minds, views Thakuri.

“Hence, they tend to behave accordingly with their female counterparts,” says Thakuri.

Schools rules are imposed on children in the name of discipline. The narrative of discipline is such that one who does not question anything happening around them, folds hands and stays quiet. The ‘rebels’ are automatically tagged as undisciplined and bad students.

This inculcates such a mindset that people should tolerate everything said by elders. In school, the elder one is a teacher and coming to the patriarchal society one lives in, the “big” person is a man, either father, husband or brother or boyfriend, opines Thakuri.

But, tolerating everything is not possible in the modern world because the educated people have opinions, says Thakuri, highlighting the system hence should change.

Mira Mishra, a lecturer of gender studies at Tribhuvan University, says such a change is gradually seen in schools across Nepal. She highlights there are a few schools in existence today that promote gender neutrality in dress code, sitting arrangement, curriculum, teaching method, and all other conducts of the schools.

It all depends on how the school authorities and teachers have conceptualised femininity, views Mishra.

Kripa Shrestha, a schoolteacher in Kathmandu, agrees, “The time has changed. We now encourage students to be interactive, instead of silencing them in every matter. Side by side, the course and textbooks are also advanced from what we had to study at our times.”

Even in rural areas of the country, some positive signs have been seen, according to Thakuri. He says the schools have been involving both students and parents also in making the rules so that they can be agreeable to all.

But, that’s not enough, views Thakuri, adding children, hence, should be taught about gender and gender stereotypes and recent changes.

Also, curriculum and textbooks should be revised as they are not gender-neutral. For example, many stories and pictures mostly showmen in brave, decisive roles such as police and women in nurturing and rearing roles.

“Most importantly, this should also be learned by teachers and school authorities and the changes should be made accordingly in their school structure and codes of conduct,” says Raut. 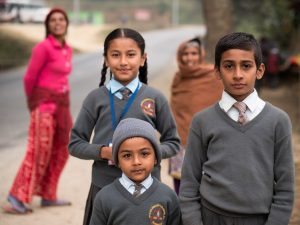