Ruling Nepal Communist Party is holding its standing committee meeting at its office in Paris Danda of Kathmandu on Sunday.

Earlier, the meeting called for Friday morning was postponed at the eleventh hour.

By Thursday evening, staff of the party had already prepared a meeting hall at the party’s office in Paris Danda, which was the headquarters of the then CPN-Maoist Centre before it merged with the then CPN-UML to form the NCP.

In the past, all meetings of the NCP would take place either in its central office in Dhumbarahi, the headquarters of the erstwhile UML, or in the prime minister’s residence in Baluwatar.

It is believed that the party’s ‘executive chairman’ Pushpa Kamal Dahal wanted to give a message of strengthened unification by calling the meeting at Paris Danda instead of Dhumbarahi or Baluwatar.

Giving an end to the months-long dispute recently, two chairmen of the party, KP Sharma Oli and Dahal, had agreed that Dahal would have ‘executive powers’ in leading the party whereas Oli would lead the government for a full term. Such agreement was made in the past also but was not implemented as Oli dominated the party too. 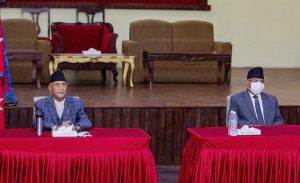