A young man has died after being hit by a police team’s fire in Nawalparasi West of southwestern Nepal on Wednesday.

The victim has been identified as Abinash Rajbhar, 23, a resident of the district.

DSP Raju Lama of the District Police Office says he breathed his last while being rushed to Butwal for treatment. He was taken to the nearby Sahid Smriti Hospital in Chaupata first, but the hospital had referred the case to Butwal owing to the severity of the injury.

He was shot at by an Armed Police Force team guarding the Nepal-India border point at Nathui/Bankatti near Susta rural municipality-5 of the district. The APF claims the squad opened the fire after around 50 people pelted stones at them in response to the law enforcers stopping them from crossing the border.

SP Mahesh Adhikari says the personnel were interrogating him about his trip considering the Covid-19 risk, but other locals suddenly pelted stones. Hence, they opened the fire for self-defence.

“A shell of tear gas was thrown initially, but it did not disperse the crowd. Hence, we were forced to open the fire.” 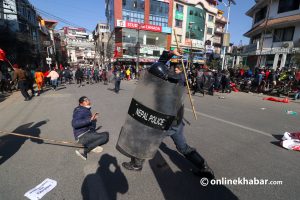 Democracy on the decline: Nepal police personnel breach the law and moral values in containing protests

2 killed in Nawalparasi hit and run