On May 17, 2007 Pasang Lhamu Sherpa set foot on the summit of Everest. Sherpa, who was on painkillers, took her last stride by lifting her right leg with her two hands.

The end of the climb was a moment that Sherpa could not believe had arrived so soon. Until a few years back, at her home in Solukhumbu, she had seen thousands of foreigners come to Lukla to climb mountains. It was there that the young Sherpa was bitten by the climbing bug.

Does her name sound familiar? Well, her namesake was the first Nepali woman to set foot on the summit (she achieved the feat on April 22, 1993, but could not make it out alive). The senior Pasang’s house is an hour’s walk from that of the junior. “‘Oh you are also Pasang Lhamu, you should also go climb mountains’,” my friends and family used to say,” remembers Pasang. “I had made up my mind. I would climb Everest one day. I didn’t know what climbing Everest meant. But I had to do it,” she remembers.

Fast forward a few years, Pasang completed her school from one of Sir Edmund Hillary’s schools, and came to Kathmandu for higher education. “Even when I was in Kathmandu, I had not forgotten my dream to climb Everest one day,” she says. To keep her thirst for mountain adventures alive, she helped mountaineering instructors manage expeditions during her Dashain break—that is when most of the climbing takes place in Nepal.

Living her dream was never going to be easy and she was aware of the obstacles. To top it off, she found out that climbing Everest requires lot of money and money comes only through sponsorship. As luck would have it, she received a scholarship to train in France. “Even while training in France, I found out that there were not many women involved in professional mountaineering,” she says. Within a few days in France, she had found her calling: to become the first female mountaineering instructor in Nepal. She had realized that although over two dozen Nepali women have climbed Everest, the number of professional women instructors was zero. 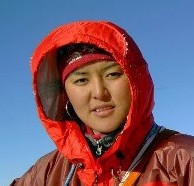 On the fateful day, Pasang and her client were near Gorakhshep in the Everest region; their plan for that day was to go to Kalapatthar. “At around 12 pm, we heard a roar. It sounded as if the mountain had exploded.” As she looked out of the window of the eatery, she saw snow gushing down the slopes. In no time, the eatery was buried under snow. “We were lucky that it was just powder snow.” Pasang and other survivors of the avalanche huddled around, and launched rescue efforts in the area. Among the people they rescued were members of an Indian expedition headed for the Base Camp.

The school where she studied and several other Hillary schools in the area were also hit.

When Pasang came to Kathmandu, she found the city badly affected, and it was only then that he magnitude of the disaster sank in. The school where she studied and several other Hillary schools in the area were also hit. Along with her husband and friends, she started a campaign to provide relief to people affected by the quake, outside the capital.

“This whole year has been full of bad news for us Nepalis,” says Pasang, who wanted to do something positive for the country amid the gloom. Her nomination for National Geographic’s Adventurer of the Year 2016 has done just that.

So why did Pasang go to Everest on painkillers? Here is what she says,” I was doing rock climbing also at that time, and I had a minor accident. I was still recovering when the opportunity of a lifetime came. So I decided to go on painkillers.”

I was still recovering when the opportunity of a lifetime came. So I decided to go on painkillers.

“When I reached the summit, I took off my oxygen mask for 30 minutes to take photos. I could not believe my eyes. I pinched myself to make sure it was not a dream,” she says.

Will she attempt another Everest climb? “Well, my family members have said they won’t allow me to go on ‘dangerous’ climbs from now on.”

Pasang is among the 10 individuals and groups nominated for the award. Voting is on till January 31, 2016. The winner will be announced in February, 2016. To vote for Pasang, click here (link expired).

Update: On 4 February, 2016, Pasang was announced the winner of the National Geographic People’s Choice Adventurer of the Year 2016. 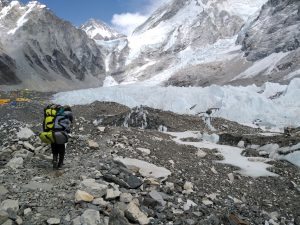