When the locals started the jatra, the police interfered citing public gatherings were not allowed as a prohibitory order imposed to control the Covid-19 disease was in effect. They tried to disperse the mob with tear gas shells and water cannons.

Then, the locals retaliated and attacked law enforcers. A video has gone viral on social media, in which the locals beat a traffic policeman black and blue. They also pelted stones at the security personnel.

The clash continued for more than two hours. 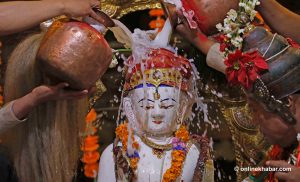