The Hanumandhoka Museum Development Committee under the Department of Archaeology is celebrating its 10th anniversary on Sunday. To commemorate the occasion, the museum had, for months, been gearing up for a few exciting news to announce it to the public. Among them is a new museum inside the Hanumandhoka premises being open to the public. Yet another is the possibility of Gaddi Baithak finally opening to the public soon.

Amid the Covid-19 crisis, the tourism industry in Nepal also went into lockdown. The Hanumandhoka Museum that was once filled with tourists fell silent. With lockdown easing, the museum also started getting a few tourists occasionally. But, unfortunately, there were restricted places and moving along was not that free; Hanumandhoka is still under construction, recovering from the earthquake that shook the nation on April 25, 2015.

For the museum, therefore, the Covid-19 crisis came as an easier excuse as it was still under reconstruction. While digging out in the course, the team found a chest full of ancient gold and silver jewellery and statues of gods and goddesses.

Museum Officer at Hanumandhoka Herchah Adda, Maya Devi Aryal, informs, “We took them‌ out, cleaned and restored them. After research, we came to know the majority of them were items used by the former Shah kings during their reigns. In the chest were inscriptions written in different scripts of the era.”

According to her, the office has already set up a temporary museum with some selective jewellery from the box for the visitors to observe. But, after today, many of the jewellery is to be displayed in the museum at the Hanumandhoka premises.

She also informs that once the Department of Archaeology was informed, they provided assistance for the restoration of the objects. “Items such as these old jewellery pieces and statues need to be handled carefully. One cannot just pick it up and treat it as they like. So, we got the expert help from the department,” she says. Meanwhile, the UNESCO in Kathmandu has also been informed regarding the new developments.

The new gallery will be called the Gargahana Museum and will be a part of the museum tour open to the public.

“We are aiming to keep the visitors entertained. As we are bouncing back from the restrictions and irregularities, we want to give our visitors–new and old–something new to observe and soak in the knowledge about the heritage that is unique to us,” she adds.

All items will be showcased in aluminium boxes with glass frames making it easier for visitors to observe while keeping it safe from the external stimulus. And for security, the Ministry of Home Affairs has managed strict security 24/7 with CCTV cameras and guards.

The plan for Gaddi Baithak

According to Aryal, her team went back and forth too many times regarding how and when to open Gaddi Baithak to the public. “In the modern time, the Gaddi Baithak has been a ceremonial building for the head of the state to observe the Indra Jatra commencement and for high-level meetings with the VVIPS of the state. But now, we are ready to open it to the public.”

Regarding the plan on how they would conduct the tour, Aryal informs, “So far, we plan for the Gaddi Baithak tour to be packaged with the already existing tour of the museum. That means the visitors will be able to take a tour with the same ticket, at the same price, 8 am to 6 pm every day. They can decide which to visit first; the Gaddi Baithak or the museum.”

When it opens, Gaddi Baithak will not house a separate gallery, rather it will be an architectural museum. “We have three biographical museums of our past Shah kings; we have courtyards as a representation of different times and excavated artefacts from the Lichhavi period proving the use [of Durbar Square] since then. It is still a place people come to for their annual rituals, offerings and cultural events. So, we plan to establish the whole of Durbar Square as an architectural museum. But for now, Gaddi Baithak will be open as an open-air or architectural museum for the first time ever.”

Contrary to previous news on Gaddi Baithak opening to the public back in 2019, the officers at the Hanumandhoka Herchah Adda denied it being open to the public. “VVIPs and other officials were invited at an [ceremonial] inauguration programme but we have not opened it to the public.”

The chief of Hanumandhoka Herchah Adda, Sandip Khanal, says, “We had plans, but it was not open officially. We are still at the final phase of the reopening of Gaddi Baithak and awaiting the clearance from the ministry. So, we can expect it to open within this financial year.”

The reconstruction of Gaddi Baithak

The then Rana Prime Minister Chandra Shumsher built Gaddi Baithak in 1908, incorporating the European architectural design. It has stood strong ever since and has been considered an architectural marvel.

In 2015, Gaddi Baithak became one of those earthquake-affected buildings in Nepal. However, the building was not severely damaged, rather it sustained cracks in beams, columns and pillars along with the roof and chandeliers.

A year later, Miyamoto Global Disaster Relief in partnership with the International Council on Monuments and Sites (ICOMOS) Nepal announced the project to be held in coordination with the Department of Archaeology.

Apart from this, other temples and buildings inside the Basantapur Durbar Square were also destroyed. The renovation of other buildings and temples is being taken care of by the Chinese government. “If the lockdown had not been in effect, they would have finished the reconstruction and handed it to the Hanumandhoka Herchah Adda already,” clarifies Aryal. 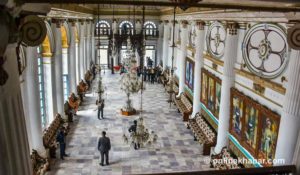 Gaddi Baithak at Hanumandhoka opens to public after restoration 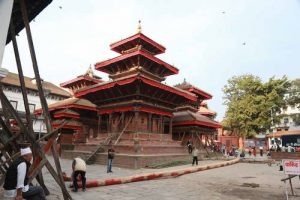 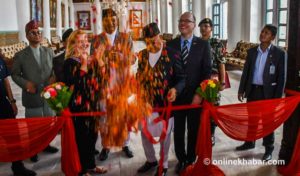 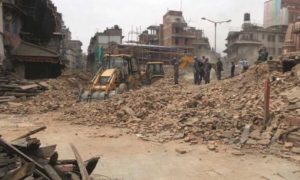 Retrofitting of Gaddi Baithak to begin within this month