Gaurika Singh, at Best Venue’s enclosed swimming pool, is putting in lap after lap. First, she works on her freestyle, then backstroke. With motivation and determination, for the next two hours, she relentlessly works on her weaknesses.

Not being able to swim in the United Kingdom due to the Covid-19 pandemic, Singh, Nepal’s young swimming sensation living in the UK with her parents, flew to Nepal in mid-February with one aim – practising for the Tokyo Olympics where she aims to better her personal record and try to beat the national record.

With National Sports Council’s swimming coach Ongden Lama, Singh trains two hours every day at Best Venue in Kalopul which has become a home for national swimmers in the winter ever since Satdobato’s pool was demolished for repair.

“Training is going well. I feel really grateful to swim again,” she says. “Initially due to Kathmandu being at a higher altitude than the UK, it was tough. But gradually, I’ve acclimatised and am getting better.”

Her preparations for Tokyo 2020 were going great. Since winning four gold medals at the South Asian Games in December 2019, her confidence was up as she was aiming towards getting that national record to her name.

But as the pandemic spread across the world, England, like Nepal, went into lockdown. Everything shut down, from shopping malls to schools to training centres and Singh, who swam every day, was confined to staying at home.

“It’s understandable because this is a pandemic,” she says. “People have had to go through worse.”

As cases were rising, swimming clubs in the UK shut down from March 2020. The pools continued to remain shut throughout the spring and only reopened around August 2020. As the pools reopened, she had started to swim again, but as cases rose, pools were shut again in November.

“Only outdoor pools were open. And, swimming outdoors in the winter in the UK is not possible.”

That is why Singh along with her mother and brother came to Nepal to train. Coach Lama says that as she had a four-month break, he is only working on her basic endurance for now and get her flow back to what it was again.

“As her endurance improves and we up the intensity of the training, we will start to record her time, which has gotten better,” he says.

Another reason Singh says she has come to Nepal is swimming in high altitudes, which is tough. But, she hopes it will help her perform in low-altitude areas.

“It produces a lot of red blood cells which helps when swimming in low-altitude areas as it increases performance level,” she says.

Even though she is here, Singh is in constant contact with her coach in the UK with whom she discusses swimming routines and weekly plans.

But as she is only 18 and is on the verge of completing her A-levels, she does have a lot on her plate. Apart from swimming, she also has online classes which take up most of her day along with homework.

“I spend my days, training at the pool, doing homework and online classes,” she says. “Along with that, I also do a bit of weight training to build my strength.”

When asked if she feels any pressure after winning golds at the South Asian Games, she says she is not fazed by and as she has grown older, she has learnt how to control her nerves in tense situations.

“I’m quite young now and athletes like me peak around our mid-20s, so for now I’m not too worried,” she says. “Since Rio 2016, I’ve matured a lot mentally and that is what’s important. Along with that, I’ve also gotten better as a swimmer as my times have improved by 6 seconds in freestyle.”

She is heading to the Tokyo Olympics with a positive frame of mind as her only goal, for now, is to better her personal time.

After spending a little over a month in Nepal, Singh is going back to the UK to appear in her final exams. Then, she will spend time with her coach in a bit to better her time before she heads to Tokyo to represent Nepal in the Olympics.

“When I was in Rio, it was very overwhelming. This year, I hope I can enjoy a bit more.” 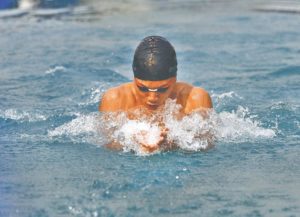