Dumré, a stereotypical Nepali town close to the highway, is a picture of mercantile zeal.

It’s an assault on the eyes (piles of pickaxes and chains and pots, plastic wares to back up an invasion) and the ears (blaring horns is the town’s background score). I have been there a couple of times and the only thing I have found pleasing is an archaic diesel hose (with a marigold garland around it, as though in reverence to its age) and a corner at the western end of town from where, on clear days, you can see the mountains.

Perhaps that is the point of Dumré, a settlement existing to demonstrate the folly of haphazard growth. The strip of road some two hundred meters long, with shops on either side, is a warning to towns: Don’t let it get to this.

A place like Dumré rouses a desire to escape. And there is a perfect getaway near Dumré.

Bandipur is that refuge from those buffets of claxons and vehicle fumes and garish signboards and storefronts. The medieval Newar town came about in much the same way as Dumré: it was established on a major trade route connecting the Terai to the hills to eventually Tibet. But that is about as much the two places have in common.

An elderly woman at Bandipur; Photo: Adam Jones/Flickr. Being a town with a rich history, Bandipur still has visual links to its past; Photo: Author.  The town was established on a major trade route connecting the Terai to the hills, to eventually Tibet; Photo: Andrew White/Flickr.

The bus ride to Bandipur is something of a clue to the destination’s character. Goats and big dokos are crammed into the small buses that ply the windy road up to the hill town. En route is the spectacle that is common in Nepal’s hills: rows of hills like blue frozen waves and beyond them the wall of snow. Buses stop at the edge of town, as vehicles are prohibited to enter the town. What awaits you in Bandipur is a wide street lined with medieval houses, their facades smothered by an explosion of bougainvillea. Wheels seem yet to be invented.

What you cannot do (or do in peace) in Kathmandu’s ancient sites is everyday life in Bandipur. You can stand below an old Newar style house and admire its beauty and not have a petulant motorcyclist shatter the spell with his horn. Pedestrians have the street to themselves.

Bandipur the prosperous trading town shriveled when the Prithivi Highway was built at the foot of the hill in the 1960s. Eventually the highway killed it altogether. The sound of Tibetans and Nepalis haggling over the prices of goods grew faint then slowly died away. Most of the residents left, opting for the promise that was Narayangadh.

In a way, it was the highway that gave Bandipur its new life, that of a tourist town. Some of the locals, nostalgic as well as far-sighted folks, got together and decided to conduct an unprecedented experiment on their hometown. They banned all vehicles from entering the main settlement. Tourists sick of the sight of traffic began coming to Bandipur to unwind and get a taste of a pedestrian’s utopia. The same road that had trampled on Bandipur became an artery that fed its new avatar.

Being a town with a rich history, one that still has visual links to its past. The town is somewhat of an anomaly: it’s a thriving tourist town that is also a ghost town. The ghostly bit is its mercantile past. A good example of that is the open field northeast of the main street. Now popular with visitors as a place to watch the sunset from, it was once the open-air market where goods brought up from the Terai and down from Tibet were displayed. It’s easy to imagine weather-beaten, leathery faced Tibetans and dusky Newars and other Nepalis gesticulating, bargaining, exchanging goods and mirth on that ground.

A walk down the main street is one down the town’s memory lane. The houses are huge. Most have the traditional Newar style, characterised by ornately carved windows and struts. There are some imitations of the Rana palaces of Kathmandu. But every house is testimony to the town’s trading period.

Paragliding flights from Bandipur offer the chance to enjoy sunset from the sky; Photo: Author.

History is often incomplete in Nepal without a dash of religion and myth. Bandipur has its share of these, too. The Khadga Mai Temple, which is tucked away on a hillock on the eastern edge of town, is a spiritual center as well as a repository of a mythical object. Inside the temple is a sword that belonged to Mukunda Sen, the 16th–century king of Palpa. The sword, which is shown to the public once a year during Dashain, is believed to have been gifted to the king by Shiva.

With a past like Bandipur’s, rich and preserved in many ways, it’s easy to fall under a spell and lose sense of the outer world. The past is the hardest thing to forget in Bandipur, and the presence of a world with vehicles and fumes the easiest to forget.

A major trade route may no longer run through it but Bandipur is still close to the road linking Kathmandu to one of the biggest tourist destinations of Nepal: Pokhara. This means that there are countless buses, both basic and luxurious ones collectively called ‘tourist bus,’ and microbuses that ply the route every day. Hop into any vehicle headed for Pokhara, get off at Dumré, and take the buses that depart every 30 minutes or so from there for Bandipur, a 30-minute ride.

Siddha Gufa
Siddha Gufa is a subterranean wonder, with huge stalagmites, unique rock formations, pits dozens of feet deep, and a thriving population of bats. The cave is 50m-high and 437m-deep—the biggest in Nepal. Besides the guided tour of the cave, you can also abseil through a hole in the cave’s roof.

Carry a good headlamp (you get one with the purchase of a ticket at the entrance, but it’s not very good quality) and enough drinking water for a trip to the cave. It’s best to visit the cave on your last day in Bandipur. That way, after you have explored the cave, you can walk down to Bimalnagar on the highway and catch a bus. It’s a steep descent to Bimalnagar from the cave, so if you’re not into walking, this is not for you.

Tundikhel
This was where traders gathered and did business in the old days. That sight is no longer there, but the spectacular view of the mountains remains. It’s a memorable sight to watch Himalayan giants like Dhaulagiri, Machhapuchhare, Langtang Lirung, Manaslu and Ganesh Himal coated in the evening sunlight.

Thani Mai Temple
This is a small shrine located on a hill at the western end of town. The blessing of the goddess is not the only reward for climbing there; the hilltop offers a sweeping view of the mountains and the valley below.

Silkworm farm
For a glimpse of the silk-making process, head down the road to the silk farm.

Paragliding
There are a couple of paragliding flights a day from Bandipur, offering the chance to enjoy the sunset from the sky.

In its modern, touristy avatar Bandipur is basically one big boulevard full of restaurants and cafes. The advice is simple: walk into any restaurant that seems right to you. Bandipur’s cooks won’t disappoint.

To see all the sites in and around Bandipur you need at least two nights in this historic settlement. If you have cash to burn, try the exquisite Gaun Ghar Resort, which has wonderful views of the mountains. Stay at the Khadgamai Guest House & Restaurant if you want something cheaper. The cheapest lodgings are available away from the main bazar, at the eastern and western ends of town.

Perhaps to stay true to its reputation as a town stuck in time, Bandipur does not have an ATM. So carry enough cash to last your stay. 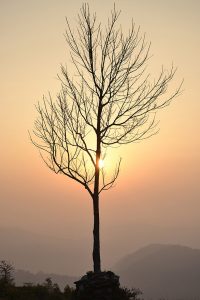