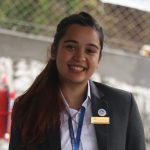 Farmers in Chitwan in queue to receive fertilisers, in September 2020.

Agriculture is a dominant sector in Nepal’s economy and it contributes about 26.98% to the national GDP (MOF, 2019). Rice is a major staple cereal here and it contributes to almost 20% to AGDP and 7% of the national GDP and more than 50% in the total calories requirement of the Nepali people. Nepal produces 4.8 million tons of paddy per year (Tripathi, Singh, Ladha and Bhandari, Rice strategy for Nepal, IRRI). That being said, the rice consumption in Nepal is pretty high and with that increases the need for even higher production to feed all the stomachs. But, considering the country’s situation and the increased dependency on the government for inputs, the production seems to be in a declining ratio.

Though Nepal is rich with freshwater sources, most of the arable land is yet to be irrigated.  The majority of the countries’ paddy production is through a rain-fed system with only a few percentages of the area covered by the irrigated canals, mainly in the flat Terai plains. Available data show that only about 7% of the rice-producing areas have assured irrigation during summer, winter, and spring seasons allowing farmers to produce double rice crops in a year.

The main season paddy is usually cultivated in the monsoon. With paddy being an exhaustive crop, the puddling operation in the lowland cultivation with the creation of anaerobic condition does not support for the soil fertility and nutrient management. Therefore, lowland paddy demands even a larger portion of fertiliser for increasing yield and productivity.

The annual demand for chemical fertiliser in Nepal is about 800,000 tonnes whereas the government officially imports only around 450,000 tonnes. Rice plants require nitrogen, phosphorus, and potassium in large amounts with some trace amounts of zinc. But, the majority of farmers in the country use traditional cultivation practices and only opt for the use of urea, which is a source of nitrogen for the soil. During a single paddy season, the urea requirement is about 120,000 tonnes whereas that od DAP is 50,000 tonnes. Though urea is quite successful in increasing the yield, the farmers of the country still do not get the amount as recommended to achieve the proper result.

For optimum efficiency, half of the recommended nitrogen dose should be applied and incorporated in the soil before transplanting as a basal application that is mainly sufficed along with the application of DAP that contains 18% nitrogen. Likewise, the remaining half of nitrogen applied in the form of urea should be done in two split doses. The first split dose has to be applied as a top dressing, 20-30 days after transplanting (early tillering stage), and the other split-dose 40-50 days after transplanting (panicle initiation stage). For the promotion of the use of these fertilisers, the government has provided with subsidies: there is a 65-70% subsidy on urea, 25-30% on DAP, and 30-32% on potassium. But, the farmers have been applying fertilisers not as per the recommended dosage but as per the level of subsidies, in turn hampering the productivity and not obtaining the expected yield.

As compared to the untimely rainfall of the previous years, the monsoon has been on time providing an ample amount of rainfall during this transplanting period. The return of migrant workers is expected to promise increased productivity for the year. According to the Ministry of Agriculture and Livestock Development, paddy cultivation was done in 98% of 1,371,706 hectares of land, which is the highest transplantation recorded in the last five years. But, keeping aside the positive aspects that are greatly looked into, what must be pondered upon for now is the availability of fertilisers and their application that greatly affects its yield with the disrupted supply chain that the pandemic has caused.

For a landlocked country like Nepal, Covid-19 has posed a great obstacle in trading with sparse trading options at hand. Nepal usually imports its fertilisers from China, Turkey, Egypt, India, and other gulf countries via Kolkata port. Now, with the pandemic at hand, the transport has been a herculean task and the country is seeing the lack of essential fertilisers, mainly urea. Though the Indian government has allowed ports to continue operations, the bare minimum of staff present has caused difficulties in packaging and handling of goods. Out of the required necessity of 800,000 tonnes, only 340,000 tonnes were distributed to the farmers, whereas 21,500 tonnes remain stuck in Kandala port of Gujrat and 89,000 tonnes in Kolkata port. Though the Minister of Agriculture and Livestock Development in his statement in early July had claimed the lack of urea would not be much of a problem with the sufficient amount of DAP and MOP at hand, the problem seems quite grave now.

By late July, the first split dose of urea should have been applied in the field in the early tillering period, which would have further increased the number of tillers in the plants. The first top dressing increases the number of tillers, aids in rapid vegetative growth and protects against diseases. But, despite the necessity, the complaints of the suffering farmers were left unheard.

To add to it now, with the beginning of September, it is the time for the second dose of top dressing for the panicle to emerge in a healthy manner. With the standard top dressing, i.e 40 days after transplanting, the number of spikelets per panicle drastically increases whereas, with the delayed application, degenerate spikelets are usually observed. The second top dressing usually ensures complete grain filling, increases the size of grain and ensures quality crops. The number of spikelets per panicle is largest for early and standard topdressing along with longer leaf blade and leaf sheaths and the increased number of shoots per area. In high-yielding hybrid paddy, which needs a heavy dose of urea, if it is not applied in a timely manner and in a required quantity, yields can drop as low as 75%. This clearly shows the necessity that a timely fertiliser application possesses for increased yields.

And, yet after almost six months of the pandemic emergence, the problem remains unsolved. The woes of farmers are still unheard of. Though the government in the current fiscal year 2020/21 had allocated Rs 10 billion for the purchase of fertilisers as compared to Rs 8.99 billion of the previous year, the expenditure result has not reached the doorsteps of farmers. For a country where most of the farming population largely involves itself with paddy cultivation during this particular time of year, the fertiliser demand would be increasingly high. The allocated budget must have been put to proper use despite the current scenarios. Focusing only on providing larger subsidies is not a solution; timely supply is of utmost importance. As an international commodity, the prices of fertiliser are constantly fluctuating, the import takes about six months to reach the country through the tender process. In this situation, ‘buffer stocks’ can be a sustainable solution. This would not only help the country buy at a lower price but also in managing the dire situation in the case of the shortage.

The state-owned Krishi Samagri Company Limited (also known as Agriculture Inputs Company Limited-AICL) and the public corporation Salt Trading Corporation Limited (STCL) are mainly two companies responsible for the fertiliser import, but the incompetence to prevent the illegal smuggling of subsidised chemical fertilisers from India seems to have largely affected the timely, sufficient and profitable supply and distribution. The monopoly of these two companies and lack of private involvement with the inability to check the smuggling have all resulted in a huge miscalculation of the fertilizer need, leaving farmers in great grief.

And, now, with the Covid-19 pandemic, those dependent on fertilisers from India are even at greater distress for the government is still not able to come to aid to all of its food growers. The farmers are spending their time on serpentine lines in hopes of getting urea in their respective district offices notwithstanding the infection threats.

As a short-term solution, the government has recently made a deal with Bangladesh for about 50,000 tonnes of fertilisers to be supplied, but its implementation will also take around one month. If the fertilisers do not reach the farmers’ field in the next three weeks, the damage cannot be undone and what awaits is a doomed future consisting of large-scale food insecurity. The lack of a visionary government is not something that the innocent citizens are supposed to pay for.

Taking the Covid-19 pandemic as an excuse to torment those who have been working tirelessly to feed the country has only worsened their situation; the whole nation is yet to see the results of the decreased productivity. Less production means higher import bill, higher inflation for the people, and a lower income for the farmers, ultimately leading to the lower consumption and demand and eventually lower economic growth for the country.

The upcoming food insecurity is something that must be looked upon for now because the elevated advantage of increased labour and the timely monsoon that this year provided have no use until other inputs are managed properly. If the action is not taken on time, this will definitely show its outcome during the harvesting period and the days to follow with an increased number of people to feed and decreased productivity.

Bhattarai is an agriculture science student at Agriculture and Forestry University, Chitwan.

Bhattarai is an agriculture science student at Agriculture and Forestry University, Chitwan.