In his book The Happy Isles of Oceania, the genre-bending travel writer Paul Theroux states that “as long as there is wilderness, there is hope.” Theroux, an established novelist and best-selling author of the acclaimed The Great Railway Bazaar, is heartbroken. His marriage is in tatters. Divorce is on the horizon. It is under such circumstances (and with a dark patch on his arm that doctors cannot rule out to be cancer) that he sets out to paddle the isles of Oceania. It is while trekking in the forests of New Zealand that he writes that line about wilderness and hope.

A wilderness is not a panacea, but it does rejuvenate. It’s a visual and physical paradox: surrounding by a mesh of green, we are disentangled from the other nets—the Internet, work, crowds, consumerism, the media. The outdoors offers us sanctuary. Most of us, caught in the labyrinth of daily life, forget this. So much so that the wilderness almost becomes otherworldly, distant, out of reach.

Wildernesses are not simply the haunts of Thoreau-like people. Nor will everyone that goes into a forest return with Wordsworthian sonnets. But nature does trigger creativity in all of us. When a person is in the midst of nature, creativity goes up. David Strayer, a cognitive psychologist at the University of Utah, has demonstrated through a study that backpacking in the wild for three days increases a person’s creative problem-solving abilities by 50 percent. Strayer hypothesizes that the brain relaxes when in nature, allowing much-needed rest for brains exhausted from the constant demands placed on it by urban lifestyles. According to a National Geographic article, an hour-long walk in a forest reduces one stress hormone by as much as 16 percent. The same article states that simply looking at pictures of natural landscapes “can calm people down.” That reminded me of being stuck in traffic. I seem to become another person—irascible and impatient. The antidote: Nature. Perusing natural scenes, the article says, light up “the anterior cingulate and the insula—areas associated with empathy and altruism. Maybe nature makes us nicer as well as calmer.”

A sad fact of urban life is that the more urbane we become the less time and space we have for nature in our lives. Life in Kathmandu, like in most big cities, is exacting and stressful. Luckily, there are still places near enough to escape to and immerse in nature.

I have often seen this forested pyramid from somewhere on the valley floor and wished I was walking its graveled trails. Shivapuri is far enough and yet not distant, wild enough without requiring Bear Gryllsian survivor skills. Hiking there is easy—unless you decide to go all the way to the peak, which is the equivalent of a leg day at the gym.

As soon as you pass the main gate at Pani Muhan you realize that you are not the only one who is there to seek shelter. Everywhere there are creatures that have been driven out from the valley floor. Bird songs are the soundtrack here, their twitter and whistles so numerous and incessant that it feels like it’s dripping down from the canopy.

For all its natural splendor and profusion, Shivapuri is not otherworldly; Kathmandu, with its veil of smog, is visible from many places on the trail. Nothing earth-shaking about the forest, nothing surreal. Nothing but enough quiet to hear your own crunchy footsteps on the gravel.

This is a token, a consolation for those sighing at what has happened to Kathmandu green spaces. The fact that a forest has survived in the middle of a sea of concrete makes it a trophy, a small victory for nature. It’s almost a diagrammatic representation of the tussle between the urban and the wild. It lies west (behind) a five-star hotel, is hemmed into the north by the Nepal Police kennel, and in all other directions concrete laps at this green island hungrily, threatening to engulf it.

The topography combined with the fact that this forest was much larger than what it is today makes it a sort of museum, a reminder of what it was. A board next to the entrance lists the various birds that can be seen in the woods: several species of barbets, the magpie robin, owls. It’s also a habitat for joggers, seclusion-seeking couples and anyone who rejoices being embowered by trees.

The Garden of Dreams

As every empty plot of land disappears from Kathmandu neighborhoods the Garden of Dreams feels like “The Answer to Prayers.” Brought back from ruins and snatched from the maws of urban development, which sought to turn the garden into a mall, this is a true lifeline for nature-deprived Kathmanduites. It is nothing short of a dream when one remembers the frenetic rush of vehicles outside its walls. The neoclassical buildings, each named after the Nepali seasons, are lovely, but what enraptures more is the greenery. From the large pine tree in the southwestern corner to the reed lining the pond to the bougainvillea, everything reminds how rare greenery is elsewhere in Kathmandu. Spend time in the garden and you realize how soothing a bench under a canopy of flowers can be. Sitting on that bench, watching children frolic on the grass and parents calmed by the flowers and the absence of city life, you see that Theroux was right. As long as there is wilderness – a thousand-square-kilometer national park, a tiny wooded area or a restored garden – there is hope.

Excerpts used in this article are from “This is Your Brain on Nature” by Florence Williams, National Geographic, January 2016. From the archive 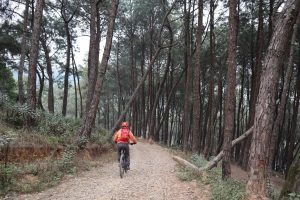 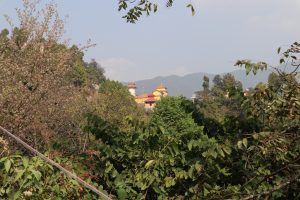 Shantidham: After lockdown, visit this hallowed site in Kathmandu 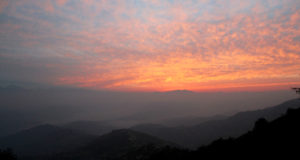