The problem of Kathmandu residents struggling to get water is increasing by the day. Many are longing and still expecting the Melamchi drinking water project will be their one-stop solution. But, the project, although already started officially, is still in shambles.

While Kathmandu struggles with poor planning and unmanaged population outburst, Dhulikhel–situated some 30 km east of Kathmandu–has been successfully operating a water treatment plant for the past 30 years. In fact, the plant has been the primary drinking water source for all Dhulikhelis.

It was one of the first international projects in Nepal, supported by the German government. It is also believed to be the first community-based water supply system and one of the most successful user committee-led projects in Nepal. The water treatment plant is a lesson about planning and cooperation for all.

How did the project start?

According to Krishna Bhushan Koju, the chairperson of the Dhulikhel Drinking Water and Sanitation Consumer Committee, the German government first worked with the local authority to start the water treatment plant. Later, Dhulikhel got an independent body to operate the plant, which comprised members that were elected from the local elections.

The project, whose construction began in 1990, got completed in 1992 and handed over to the user’s committee in 1993. It was officially inaugurated in December 1997.

Today, he says, it is also one of the self-sustained bodies that operate by collecting tariffs from the beneficiaries. The user committee has 15 members, including six women, that are elected by the beneficiaries. The current chair explains that in the election, there is a ‘one tap, one vote’ system, which includes both the households and the commercial users alike.

Dhulikhel does not have a water source big and perennial enough from where the locals can get enough water. However, the town has an agreement with Panauti, a neighbouring town, and then got water from there.

Dipak Gyawali, a former minister for water resources and water resources expert and one of the project members, says, “Despite the upstream communities also expressing their need for the water supply, the then mayor of Dhulikhel insisted that he needed to get the water for Dhulikhel so that he could catalyse other developments in the town including tourism, health and education.”

“He knew without water, they would not have been possible. And, we see his vision coming true today.”

Dhulikhel was one of the key trading places near Kathmandu in the past. There were many businesspersons and traders, so when the water treatment plant came to Nepal, there were many interests poured into the plant. And many wanted to get a hold of the plant, he adds. After many negotiations, the locals were given the responsibility.

Meanwhile, he says, “The German government had just entered Nepal and set up its office in Bhaktapur. They had already been investing in development projects of water, drainage and road. A team led by Bed Prasad Shrestha, the then chief (mayor) of Dhulikhel, met the German team and got the project.”

How is it operated?

As per Amrit Lal Pote, a former engineer at Kathmandu Upatyaka Khanepani Limited and now the manager of the user committee, the water treatment plant has the capacity of storing and distributing 1.7 million litres a day.

“The majority of the water comes from Khar Khola of Panauti. We have streamlined the water directly from the source with the help of pipes laid all the way from the source to the collection tanker. Another key source is the natural spring sheds in the forest of Dhulikhel. Lastly, we also collect groundwater from the tube wells.”

Depending on the season, the water treatment plant treats the water differently, according to Pote. In summer and monsoon, it first coagulates the water in a settling tank where water is filtered for any solid materials present in the water. The collected water then gets treated through roughing filtration where it passes through the gravels of different sizes–5-6 cm; 2-3 cm; and 1-1.5 cm–for the further filtration process.”

The water from there gets transported to the sedimentation pits, also known as the rapid sand filters (RSF) where the water gets to sediment. There are two pits in the premises filled with different layers of gravel and sand, each of 300 sq metres.

The project has a separate tank with a 500,000-litre capacity that boosts and bridges the gap in demand for water supply.

After the processing, the water gets treated with chlorine in the post-chlorination phase before it gets distributed for drinking. Here at this stage, a regular free chlorine test (FRC) is conducted as per the legal standard of 0.2 mg/litre for supply directly to the water taps, in full or half capacity to different wards of the municipality.

Koju adds, “At times when water-borne or water-related diseases like cholera are on the rise, we also conduct pre-chlorination for better filtration.”

Pote says that the water has not been tested for harmful chemicals except iron. However, given that the government is yet to set standards or make policies regarding microplastics, the treatment plant has not conducted such tests yet.

Almost 3,300 households are benefitting from the water treatment plant today.

How is the money managed?

In some seasons, when the demand exceeds the supply, households and commercial bodies manage their need by ordering water tankers.

Since the project is bringing the water from upstreams, the plant has to pay Rs 1.2 million annually to the upstream communities as compensation, as per their negotiations.

The 14-km pipes used today were the same ones laid some 30 years ago. That means the pipes need to be maintained and checked regularly for leaks and bursts. There have been no serious incidents, but landslides, mining activities and other unforeseen incidents have disrupted the water supply.

Yet, with prompt action by the plant, the disruption has only lasted a day.

All the expenses are covered by the user committee’s revenue. For the first two years, the Nepal government bore the expense of the salaries of the water treatment plant, which was cut down to 60 per cent and, with further cuts, today, the plant is handling all its expenses on its own and a majority comes from the tariff they charge.

“The tariff we charge from the users is a volumetric system or based on the volumes they use. For households, we charge Rs 19 per unit (per 1,000 litres) whereas commercial users pay Rs 99 per unit. The residential users pay the tariff based on the metre readings set in their houses,” informs Koju.

The project’s biggest consumers are Kathmandu University, Dhulikhel Hospital, government offices and the many hotels that have taken shelter in the hills of Dhulikhel. They make up to 7 per cent of the beneficiaries of the plant. But interestingly, the few consumers and the tariff they pay are almost equal to the tariff paid by the other 93 per cent of the household users.

So, does it suffice future needs?

However, now that, the population is expanding in Dhulikhel too, the water treatment plant is not sufficient to supply water to all the residents. Hence, the project has started looking for alternatives from other nearby streams to add to the resources and distribute water accordingly. With help from different I/NGOs, the water treatment plant has been able to get more water now.

This includes the pumping of groundwater, from 150 m below the ground level, which started some three years ago. According to former minister Dipak Gyawali, the plant’s original design did not have any expansion plan included because it was not the practice at that time. However, he says, now, it is the need of the time with growing demand.

Addressing that, on the government level, the three municipalities of the Kavre district–Dhulikhel, Banepa and Panauti–have now agreed upon and started setting up a single water supply system that caters to the latter/peripheral settlements in all three municipalities. This separate system is aimed to cater for those who are not already benefiting from the three-decade-old water plant. Supported by the Asian Development Bank, the construction of this system is now in its final stage.

But, as the project nears its completion, there is some contention around it. The bodies working on the new project want to also incorporate the older water treatment plant into their system. Dhulikhel Mayor Ashok Kumar Byanju claims the project is aimed towards the public interest and the water system will operate independently. He, however, did not comment on the contention.

On the other hand, the operators of the water treatment plant do not agree with the merger and are adamant that they would rather continue to operate independently, as it is.

Confusions are still up in the air. 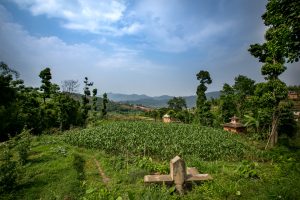 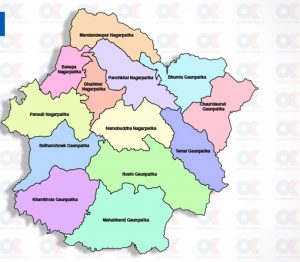 Boldeferiche VDC of Kavre under high risk of landslides, 62 families in need of immediate help